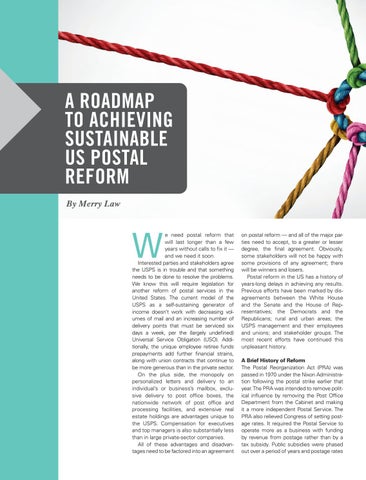 A ROADMAP TO ACHIEVING SUSTAINABLE US POSTAL REFORM By Merry Law

e need postal reform that will last longer than a few years without calls to fix it — and we need it soon. Interested parties and stakeholders agree the USPS is in trouble and that something needs to be done to resolve the problems. We know this will require legislation for another reform of postal services in the United States. The current model of the USPS as a self-sustaining generator of income doesn’t work with decreasing volumes of mail and an increasing number of delivery points that must be serviced six days a week, per the (largely undefined) Universal Service Obligation (USO). Additionally, the unique employee retiree funds prepayments add further financial strains, along with union contracts that continue to be more generous than in the private sector. On the plus side, the monopoly on personalized letters and delivery to an individual’s or business’s mailbox, exclusive delivery to post office boxes, the nationwide network of post office and processing facilities, and extensive real estate holdings are advantages unique to the USPS. Compensation for executives and top managers is also substantially less than in large private-sector companies. All of these advantages and disadvantages need to be factored into an agreement

on postal reform — and all of the major parties need to accept, to a greater or lesser degree, the final agreement. Obviously, some stakeholders will not be happy with some provisions of any agreement; there will be winners and losers. Postal reform in the US has a history of years-long delays in achieving any results. Previous efforts have been marked by disagreements between the White House and the Senate and the House of Representatives; the Democrats and the Republicans; rural and urban areas; the USPS management and their employees and unions; and stakeholder groups. The most recent efforts have continued this unpleasant history. A Brief History of Reform The Postal Reorganization Act (PRA) was passed in 1970 under the Nixon Administration following the postal strike earlier that year. The PRA was intended to remove political influence by removing the Post Office Department from the Cabinet and making it a more independent Postal Service. The PRA also relieved Congress of setting postage rates. It required the Postal Service to operate more as a business with funding by revenue from postage rather than by a tax subsidy. Public subsidies were phased out over a period of years and postage rates