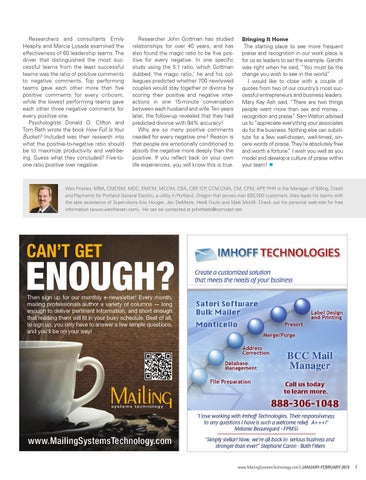 Researchers and consultants Emily Heaphy and Marcia Losada examined the effectiveness of 60 leadership teams. The driver that distinguished the most successful teams from the least successful teams was the ratio of positive comments to negative comments. Top performing teams gave each other more than five positive comments for every criticism, while the lowest performing teams gave each other three negative comments for every positive one. Psychologists Donald O. Clifton and Tom Rath wrote the book How Full Is Your Bucket? Included was their research into what the positive-to-negative ratio should be to maximize productivity and well-being. Guess what they concluded? Five-toone ratio positive over negative.

Researcher John Gottman has studied relationships for over 40 years, and has also found the magic ratio to be five positive for every negative. In one specific study using the 5:1 ratio, which Gottman dubbed 'the magic ratio,' he and his colleagues predicted whether 700 newlywed couples would stay together or divorce by scoring their positive and negative interactions in one 15-minute conversation between each husband and wife. Ten years later, the follow-up revealed that they had predicted divorce with 94% accuracy! Why are so many positive comments needed for every negative one? Reason is that people are emotionally conditioned to absorb the negative more deeply than the positive. If you reflect back on your own life experiences, you will know this is true.

Bringing It Home The starting place to see more frequent praise and recognition in our work place is for us as leaders to set the example. Gandhi was right when he said, “You must be the change you wish to see in the world.” I would like to close with a couple of quotes from two of our country’s most successful entrepreneurs and business leaders. Mary Kay Ash said, “There are two things people want more than sex and money… recognition and praise.” Sam Walton advised us to “appreciate everything your associates do for the business. Nothing else can substitute for a few well-chosen, well-timed, sincere words of praise. They’re absolutely free and worth a fortune.” I wish you well as you model and develop a culture of praise within your team! ¾

Wes Friesen, MBA, CMDSM, MDC, EMCM, MCOM, CBA, CBF, ICP, CCM,CMA, CM, CFM, APP, PHR is the Manager of Billing, Credit and Payments for Portland General Electric, a utility in Portland, Oregon that serves over 830,000 customers. Wes leads his teams with the able assistance of Supervisors Eric Houger, Jan DeMeire, Heidi Fouts and Matt McHill. Check out his personal web-site for free information (www.wesfriesen.com). He can be contacted at pchefdebi@comcast.net.