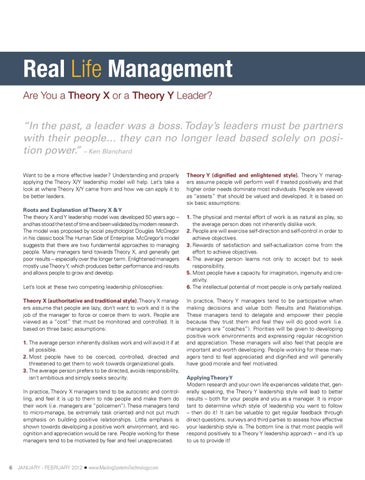 Real Life Management Are You a Theory X or a Theory Y Leader? “In the past, a leader was a boss. Today’s leaders must be partners with their people… they can no longer lead based solely on position power.” – Ken Blanchard Want to be a more effective leader? understanding and properly applying the Theory X/y leadership model will help. Let’s take a look at where Theory X/y came from and how we can apply it to be better leaders. Roots and Explanation of Theory X & Y The theory X and y leadership model was developed 50 years ago – and has stood the test of time and been validated by modern research. The model was proposed by social psychologist Douglas McGregor in his classic book The Human Side of enterprise. McGregor’s model suggests that there are two fundamental approaches to managing people. Many managers tend towards Theory X, and generally get poor results – especially over the longer term. enlightened managers mostly use Theory y, which produces better performance and results and allows people to grow and develop. Let’s look at these two competing leadership philosophies: Theory X (authoritative and traditional style). Theory X managers assume that people are lazy, don’t want to work and it is the job of the manager to force or coerce them to work. People are viewed as a “cost” that must be monitored and controlled. It is based on three basic assumptions: 1. The average person inherently dislikes work and will avoid it if at all possible. 2. Most people have to be coerced, controlled, directed and threatened to get them to work towards organizational goals. 3. The average person prefers to be directed, avoids responsibility, isn’t ambitious and simply seeks security. In practice, Theory X managers tend to be autocratic and controlling, and feel it is up to them to ride people and make them do their work (i.e. managers are “policemen”). These managers tend to micro-manage, be extremely task oriented and not put much emphasis on building positive relationships. Little emphasis is shown towards developing a positive work environment, and recognition and appreciation would be rare. People working for these managers tend to be motivated by fear and feel unappreciated.

Theory Y (dignified and enlightened style). Theory y managers assume people will perform well if treated positively and that higher order needs dominate most individuals. People are viewed as “assets” that should be valued and developed. It is based on six basic assumptions: 1. The physical and mental effort of work is as natural as play, so the average person does not inherently dislike work. 2. People are will exercise self-direction and self-control in order to achieve objectives. 3. rewards of satisfaction and self-actualization come from the effort to achieve objectives. 4. The average person learns not only to accept but to seek responsibility. 5. Most people have a capacity for imagination, ingenuity and creativity. 6. The intellectual potential of most people is only partially realized. In practice, Theory y managers tend to be participative when making decisions and value both results and relationships. These managers tend to delegate and empower their people because they trust them and feel they will do good work (i.e. managers are “coaches”). Priorities will be given to developing positive work environments and expressing regular recognition and appreciation. These managers will also feel that people are important and worth developing. People working for these managers tend to feel appreciated and dignified and will generally have good morale and feel motivated. Applying Theory Y Modern research and your own life experiences validate that, generally speaking, the Theory y leadership style will lead to better results – both for your people and you as a manager. It is important to determine which style of leadership you want to follow – then do it! It can be valuable to get regular feedback through direct questions, surveys and third parties to assess how effective your leadership style is. The bottom line is that most people will respond positively to a Theory y leadership approach – and it’s up to us to provide it!