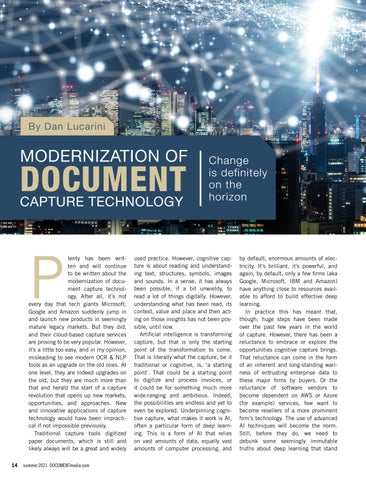 lenty has been written and will continue to be written about the modernization of document capture technology. After all, it’s not every day that tech giants Microsoft, Google and Amazon suddenly jump in and launch new products in seemingly mature legacy markets. But they did, and their cloud-based capture services are proving to be very popular. However, it’s a little too easy, and in my opinion, misleading to see modern OCR & NLP tools as an upgrade on the old ones. At one level, they are indeed upgrades on the old, but they are much more than that and herald the start of a capture revolution that opens up new markets, opportunities, and approaches. New and innovative applications of capture technology would have been impractical if not impossible previously. Traditional capture tools digitized paper documents, which is still and likely always will be a great and widely

Change is definitely on the horizon

used practice. However, cognitive capture is about reading and understanding text, structures, symbols, images and sounds. In a sense, it has always been possible, if a bit unwieldy, to read a lot of things digitally. However, understanding what has been read, its context, value and place and then acting on those insights has not been possible, until now. Artificial intelligence is transforming capture, but that is only the starting point of the transformation to come. That is literally what the capture, be it traditional or cognitive, is, ‘a starting point’. That could be a starting point to digitize and process invoices, or it could be for something much more wide-ranging and ambitious. Indeed, the possibilities are endless and yet to even be explored. Underpinning cognitive capture, what makes it work is AI, often a particular form of deep learning. This is a form of AI that relies on vast amounts of data, equally vast amounts of computer processing, and

by default, enormous amounts of electricity. It’s brilliant, it’s powerful, and again, by default, only a few firms (aka Google, Microsoft, IBM and Amazon) have anything close to resources available to afford to build effective deep learning. In practice this has meant that, though, huge steps have been made over the past few years in the world of capture. However, there has been a reluctance to embrace or explore the opportunities cognitive capture brings. That reluctance can come in the form of an inherent and long-standing wariness of entrusting enterprise data to these major firms by buyers. Or the reluctance of software vendors to become dependent on AWS or Azure (for example) services, few want to become resellers of a more prominent firm’s technology. The use of advanced AI techniques will become the norm. Still, before they do, we need to debunk some seemingly immutable truths about deep learning that stand