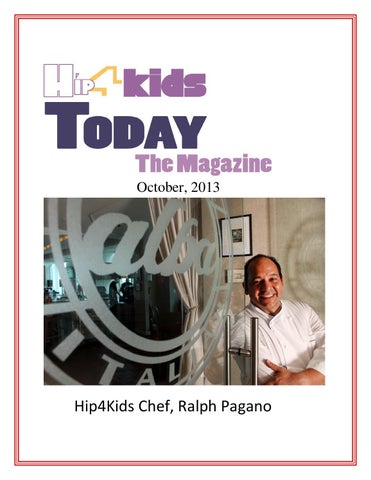 Chef Paganoâ&#x20AC;&#x2122;s love affair with food began early in life. His first job, at 13, was working as a dishwasher and busboy at a restaurant where he paid more attention to what the chef's were making than he did to his homework. His Italian family members taught him to make their favorite dishes, such as "Sunday gravy" and "veal scallopini," but he really developed his skills at the Culinary Institute of America. "I had the advantage over the other students," he says, "because I knew my way around the kitchen." And now, this celebrity chef has even become a member of the Hip4Kids team!

Quotation – October “When a small child, I thought that success spelled happiness. I was wrong. Happiness is like a butterfly which appears and delights us for one brief moment, but soon flits away”. Anna Pavlova

Chef Christopher Daly… It’s Just Not Getting any better! New York State is turning in its fall colors now; the weather is taking on that chill that says “The Old Man is Down the Road”. Winter is coming and that is no news! For a few days I have managed to “cheat” the old man with a side trip to Miami and hold on to some beautiful summer-like weather.

A good friend is a top chef and a Hell’s Kitchen survivor and an incredibly talented restaurant operator. He showed me around Miami and educated me on what the market here is really about. He even worked me into his media schedule for three days or so. What an incredible amount of activity, but that is the stamina of a guy who survived Gordon Ramsey and Hell’s Kitchen, filmed Pressure Cook all over the world, stars in the current Life Time cooking show “All Mixed Up’ and sells his own wares on QVC. All of the tasks like the ones above are accomplished while simultaneously running a food and beverage program for the breathtaking Hotel Sole’ in Miami Beach. His restaurant, Alba Seaside Italian, an affiliated events company that delivers A-list off

premise catering and a ‘Go Local “pop up cooking program with The Miami Heat at their home base in The American Airlines Arena. This morning I spent an hour or so in the Miami’s Classic Rock 105.9 Booth as a guest of Ralph’s with Paul and Young Ron, lightning wit, good humor, great music and Chef Pagano’s recipe of the week for Metro Miami. I was amazed how incredibly up-to-theminute these guys are as thousands of news bytes come up in minutes and they are on top of all of them. That is their job though, and it’s all informing, and it’s all news. While they were on air I noticed a flash on one screen, ‘Americas Obesity Epidemic Spinning out of Control” came across like a lightning flash.

To Hip4Kids this really isn’t much of a news flash, but it flies in the face of so many claims out there that so many agencies have started to beat the problem back. We certainly haven’t slowed down or lacked stamina in our fight against childhood obesity and we are starting this school year in the South Bronx with “Keep the Lights on After School” and the After School Alliance. Hip4Kid’s chefs are deploying our Project Apple curriculum combined with our after school cooking program for the third straight year with NYC Schools for ESL and CFES students. As we continue with our nearly 14-year-old mission, we will do our part again this school year and continue to hammer home the message, and serve in the most underserved

and impoverished community in the United States - The South Bronx. We will use another school year to educate a few more thousand kids and try to keep them constructive and off the streets during those all-important hours after the school bell rings.

And that is no new news!

And Fast Foods are not a part of this picture.

Eat lots of vegetables and fruits. Choose whole grain foods over processed grain products. Include dried beans (like kidney or pinto beans) and lentils in your meals. Include fish in your meals 2-3 times per week. Choose lean meats and remove the skin from chicken and turkey. Choose non-fat dairy such as non-fat milk, yogurt and cheese. Choose water and calorie-free drinks instead of soda, fruit punch, sweet tea, and other sugar-sweetened drinks. Choose liquid oils for cooking instead of solid fats. Cut back on high calorie snack foods such as desserts like candy, chips, cakes and full-fat ice cream.

And speaking of healthy food, did anyone know that 2013 was the Year of Quinoa? This comes from the United Nations and this ancient grain is the newer (and better) white rice. Recent studies are providing us with a greatly expanded list of anti-inflammatory phytonutrients in quinoa. It may be the key to understanding preliminary animal studies that show decreased risk of inflammation-related problems (including obesity) when animals are fed quinoa on a daily basis.

Letâ&#x20AC;&#x2122;s not forget that one of the most important things you can do to rejuvenate your mind, body and soul is to get a good nightâ&#x20AC;&#x2122;s sleep. Sleeping plays a big part in staying healthy. The general school of thought is that you need eight hours per night. A number of studies show that the hours vary slightly from person to person. The important rule is to try to sleep as many hours as it takes your body to feel like it has enough sleep. Our bodies do speak to us!

Joel Harper is a celebrity trainer with clients ranging from Dr. Oz to Olympic Medalistsâ&#x20AC;Ś

Cheerfulness is contagious, but don't wait to catch it from others. Be a carrier! Joel Harper says â&#x20AC;&#x153;Exercise is Hip4Kids!

A Healthier Halloween! by Julie Upton

To kids, candy rocks! No wonder a holiday that's based on free candy and dressing up in costumes is so popular with children. As a nation, we love candy. So much so that we eat nearly 25 pounds per person per year, with Halloween taking the biggest bite out of our annual consumption.

What's more, according to research in the American Journal of Clinical Nutrition, 17 percent of the calories in 6- to 17-year-olds' diets come from added sugars -- as much as 22 teaspoons per day. As a result, many adults are looking for healthier options to give to treat-seekers at their doorstep. Here are some of my go-tos for All Hallow's Eveâ&#x20AC;Ś

Sun-Maid's mini boxes of California raisins have just 45 calories, no added sugar and are fat free. What's more, a recent University of Toronto study found kids reported feeling fuller and ate fewer calories at their next meal when they snacked on raisins compared to other popular snacks. Jelly beans are a great option because they can satisfy a sweet tooth without as many calories as traditional chocolate candies. Jelly Belly's Kids Mix includes the flavors children love most, like watermelon, very cherry, sour apple and bubble gum in a pint-sized package. Each mini packet has just 28 calories. Nuts are a great snack to keep tummies satisfied with the fiber and protein they provide. Since nuts are high in calories, look for the single-serve packages that keep

calories in check. A mini-sized (1 oz) pack of Wonderful Pistachios has 80 calories, 3 grams protein and 2 grams fiber. Kids also have fun cracking them open. If you're going with chocolate, never hand out full size candy bars and opt for fun-sized or miniatures to cut calories, sat fat and sugar. For example, a mini Three Musketeers has 24 calories; the fun size, 63 calories; and the fullsize, 240 calories. Some of the lowest-calorie options include Three Musketeers, York Peppermint Patties and Junior Mints.

Julie Upton, M.S., R.D., CSSD, is a San Francisco Bay area-based registered dietitian and communications expert specializing in food and nutrition, fitness and health. She is a nationally-recognized journalist whose articles have appeared in national magazines, major newspapers and emedia including Prevention, Shape, Health, Good Housekeeping, The New York Times and USA Today.

For fourteen years Hip4Kids has been delivering Healthy Cooking Demos, Health Fairs and Educational Programming to children across the country in an effort to combat Childhood Obesity and Type II Diabetes.

With our separate after-school formats and free online curriculum, we have delivered educational services to a more than 200,000 children, parents and teachers. Hip4Kids is recognized by The Internal Revenue Service as a 501 c (3) Educational Company and is recognized by The New York State Attorney General as A Charitable Organization Your tax-deductible gift is applied directly to employing our student teachers and conducting our Healthy Living & Healthy Cooking Workshops and programs for underserved populations everywhere such as our current Middle School Programming for New York City Public Schools. With your tax-deductible gift you too can be Hip4Kids! Help Us Make a Difference in Education Today! Visit www.Hip4Kids.org – “Ways to Help”

about German sausage are the wurst.

know a guy who's addicted to brake fluid. He says he can stop any time. How does Moses make his tea? Hebrews it.  This girl

said she recognized me from the vegetarian club, but I'd never met herbivore.  I'm

reading a book about anti-gravity. I can't put it down. I

did a theatrical performance about puns. It was a play on words.

The Energizer bunny was arrested and

old man didn't like his beard at first. Then it grew on him.  Did you

hear about the cross eyed teacher who lost her job because she couldn't control her pupils?  England

has no kidney bank, but it does have a Liverpool.  I 

used to be a banker, but then I lost interest.

the toilets in New York’s police stations have been stolen. Police have nothing to go on.  Cartoonist found

dead in home. Details are Healthy Food and Exercise for children and the entire family.

Healthy Food and Exercise for children and the entire family.