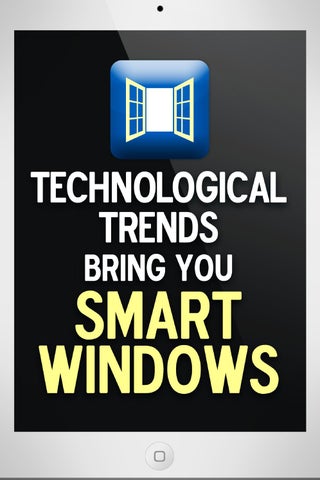 Have you ever been at your desk at work only to suddenly realize that you’ve left something cooking in the oven? Or could it be that you forgot to turn on your security alarm before you left? In the old days, you’d be zooming back home to check on things. Not anymore. Where the smart home was once merely a figment of the imagination, this is clearly no longer the case. Smart homes are the future , and the future is nearly here. More and more, homeowners are making choices to help them save over the long term, and with an eye to current trends, have started automating some of their electronics at home. On the manufacturing side, producers are racing to develop technological advances in locks , doors, windows, and many other things to compete for the growing consumer demand for “smart” technology. While the industry has yet to develop to a point where there’s a universal method of communication among all the different home devices, the connected dream is well on its way to becoming the de rigueur in every home.

What spurs this development is several inescapable facts about energy and energy consumption that the average American consumer is faced with. Unless youâ&amp;#x20AC;&amp;#x2122;ve been living under a rock, youâ&amp;#x20AC;&amp;#x2122;re probably well aware that our energy sources are rapidly diminishing. In fact, the Department of Energy has already predicted that in the next two decades, energy consumption will rise by 45 percent for electricity, 62 percent for natural gas, and 33 percent for oilâ&amp;#x20AC;&amp;#x201D;and that energy supplies will not be sufficient to meet the demand. Meanwhile, regular consumers like you and me will have to deal with the higher cost of energy.

It’s no wonder that there is now a seemingly concerted effort to find and develop technologies that will effectively address the energy consumption issues with which we are now faced. While most efforts are directed towards increasing energy supply, a handful of researchers have been working on “smart” ways to reduce energy consumption without us having to give up many of the modern-day conveniences we are used to. Among the technologies already on the market today are smart windows—no, not Microsoft Windows the operating system, but something just as exciting. We’re talking here of cutting-edge technology for the home: windows that control heat and light. These windows are designed to help reduce the cost of lighting, heating, and cooling with the push of a button or the twist of a knob. With about 2 percent of national energy consumption losses attributed to the current crop of residential windows available on the market, this technology has the potential to save American consumers billions of dollars.

How often have you caught yourself groaning at the thought of having to clean your window treatments? Hanging and taking down heavy drapes or even light curtains can be quite a chore. Washing them yourself can be backbreaking work, and having them dry-cleaned can be costly. Blinds, on the other hand, also need to be cleaned meticulously, which can take up most of your day. Smart windows are the first step towards easing that burden. Save yourself the hassle of cleaning your windows treatments, save money on dry-cleaning, and save as well as on your electric bill. Does this sound too good to be true? Well good things come to those who wait, and we’ve sure waited long enough for this technological innovation to become a reality. During sunny days, heat from the sun can also raise temperatures inside your home, which can put quite a strain on your air conditioning. Smart windows help reduce the work by blocking out the extra heat. In addition, because your smart windows can also keep UV radiation out, you get extra protection for your carpets, furniture, and precious paintings as well. You can control the amount of heat and light that enters your home by choosing to install smart windows. Let’s take a quick snapshot of where we’re at with the technologies that are available in smart window applications:

Thermotropics and Photocromics or photochromatics While these technologies can be used in smart windows, they’re thought to be the least practical among the currently available choices. Like the lenses of sunglasses, photochromic windows will darken in response to light— Smart Homes Turn Into Reality

so on a sunny but cold winter day, these windows will darken and block out light instead of letting it in to warm the inside of your home. A thermotropic window, which responds to heat, will likewise block out the sun even when you want to let the heat in. Neither type can be manually controlled, rendering them practically useless as a means of saving energy.

Liquid Crystals Once upon a time, we thought of horizontal mini blinds as the beeâ&amp;#x20AC;&amp;#x2122;s knees. However, with current applications in liquid crystal technology, curtains and blinds may soon be obsolete, except, perhaps, for decorative purposes. Liquid Crystals are found in many of our everyday products, such as calculators, clocks, computers, microwave ovens, watches, and the like. In window technology, the liquid crystals respond to electricity, arranging molecules randomly and blocking out light in the absence of an electrical charge. Turn the juice on, and the crystals align themselves to let light through. With LCD glass, you get either a clear or a translucent window; thereâ&amp;#x20AC;&amp;#x2122;s nothing in between.

So these first two technologies are good choices, but why stop at that if there are even smarter choices available to us?

And We Only Get

We conventionally use curtains to block out light and to serve as a barrier to keep heat in during winter. Curtains have also been useful for protecting our privacy. However, they haven’t always been an efficient means of conserving energy and light. Enter the smart window. In Part 2, we talked about smart windows that use liquid crystals. The next technological innovation takes cues from earlier LCD technology and applies them to what is currently known as suspended particle devices (SPD), which are tiny light-absorbing microscopic particles that can make your windows go from dark to clear in mere seconds with the flip of a switch.

Suspended Particle Displays To understand how SPD windows work, think of SPDs as light valves that are placed in between two conductioncoated glass panels. The conductive coating transfers the electric current to the SPDs, which then line up to let light through, just as in LCD windows. The difference is, with an SPD window, you can adjust the level of current—usually with a remote and automatic device—and as the voltage goes down to zero, the windows darken further until they become completely dark. If you’re wondering how these windows can possibly be energy-efficient, consider this: Around 15 large SPD smart windows installed in your home will use up less electricity than a simple nightlight will.

15 large SPD smart windows installed in your home will use up less electricity than a simple nightlight will.

Electrochromics Electrochromic windows similarly work with electricity, but they work inversely to how SPDs work. They grow darker when thereâ&amp;#x20AC;&amp;#x2122;s electric current and become clear in its absence. Like SPDs, they also allow varying levels of visibility. A chemical reaction (an oxidation reaction) takes place in the electrochromic material, which affects how it absorbs and reflects light. Essentially, the material changes from colored, i.e., reflecting light of some color, to transparent, or not reflecting any light at all. You can run the electrochromic windows of an entire house and spend only as much as you would to power a 75-watt bulb.

New Reflective Hydrides This technology takes off from the same principles that work on electrochromic technology, but these employ thin films made of a nickel-magnesium alloy to switch from a transparent to a reflective state and back. These windows can switch by using either low-voltage electricity or by the injection of hydrogen and oxygen gases (gas-chromic technology). This material can potentially be even more energy efficient than standard electrochromic windows are.

In the past, weâ&amp;#x20AC;&amp;#x2122;ve always been matter-of-fact when thinking of windows, but with recent advances in window technology, it now makes an awful lot of sense to consider our window choices in a different light. Smart window technology has matured into a full-blown consumer trend that is now making more people sit up and take notice.

Renewal by Andersen of St. Louis

Wondering on how to save up money for your home windows? Here are some cutting edge technologies you can use to help you reduce the cost of lighting, heating and cooling.