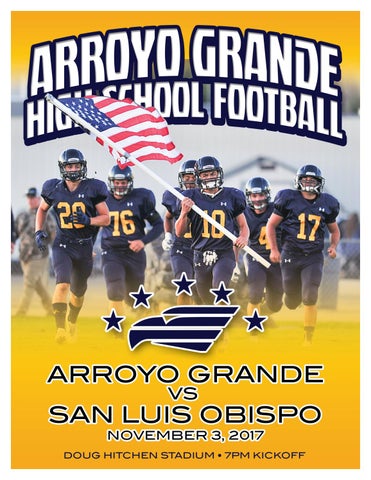 For more information and team schedules, check out

A MESSAGE FROM PRINCIPAL NEFF... Welcome to Arroyo Grande High School and Doug Hitchen Stadium, home of the 5 time CIF football champions! This year’s varsity Eagles are led by Head Coach Mike Hartman and a staff consisting of Trevor Coville, Stephen Field, Mark Flowers, Kyle Aniotzbehere, John Beck, James Carter, Rich Aguilar, and Tyler Inouye. Leading the JV and Freshman levels, the solid foundation of our program, are Jeff Byars, Gary Rugg, Sam Coleman, Cameron Alarcio, Danny Shiraishi, Phillip Dollman, Corey Mayne, Drew Summerfield, Mel Cozby, Noah Banks, and Fredy Castillo. I truly appreciate these men for giving countless hours of their time and helping these young players in their search to become stronger football players, better teammates, and outstanding individuals in our community. In the end, the true goal of Arroyo Grande Athletics is to educate our young students. It is about learning the values taught by athletics, especially respect for others and oneself, that sets high school sports apart from other levels of competition. Arroyo Grande High School has a rich tradition of excellence, both on and off the athletic fields. Our students continually get accepted into post secondary colleges and programs at high numbers and we continue to be the premiere athletic community on the Central Coast. Many of the athletes you see on the field tonight are high achievers in both the classroom and field, with many possessing grade point averages above a 3.8. Additionally, our athletes are involved with leadership classes on our campus that promote healthy lifestyles, positive choices, and a school environment that is free of bullying. They are also an integral part of school clubs, community service organizations throughout the 5 Cities community, and our local churches. Dan Neff

At Arroyo Grande High School, our students’ involvement with their school and their AGHS Principal community is a vital component of the tradition of excellence that has been set forth by previous generations of Eagles. Please assist us in upholding this tradition by getting involved with our Athletic Booster Club by contacting Kim Banks at kbanksaghs@yahoo.com or the school at 474-3200 ext. 2261, or by visiting our web site, www.aghseagles.org. For everyone in attendance, I want to send a special “Thank You” to the parents of all of the athletes, cheerleaders, band, and color guard in helping us with their commitment to making this a special event. I also want thank the community, local businesses, and alumni for their continued support of all of the programs at Arroyo Grande High School. As an alumni, past Eagle athlete, parent, and a proud member of this community, please join me in showing respect for all opponents, coaches, spectators, officials, and for the fans sitting next to you. Dan Neff

E THLET DEVELOP A ME TH U O

The Fellowship of Christian Athletes (FCA) meets weekly on campus for student-led clubs (â&amp;#x20AC;&amp;#x153;huddlesâ&amp;#x20AC;?). Visit the website below for details. They also seek partnerships with local businesses and organizations to help raise money for local schools. The Annual FCA All Star Football Classic is a great example. Through the game, FCA has helped the Arroyo Grande Eagles raise $77,314 for their football program over the past five years!!

STAY TUNED FOR ALL THE DETAILS ABOUT THE 2018 FCA ALL STAR FOOTBALL CLASSIC! FCA also promotes Drug and Alcohol Free Athletics through One Way to Play - Drug Free (OW2P), a systematic program developed to confront the problem of drug use among students by instilling values, encouraging goal-setting, and establishing accountability through positive peer pressure.

Feet on the sand. Smile on the face. Experience the only full service hotel on the sands of Pismo Beach.

From the Adelman Family~ with admiration and gratitude for all our AGHS Teams and Coaches!

Join our winning team. A credit union is owned by its members. We’re like a big team, working together to make banking better. We focus on community and providing exceptional service. It’s a winning strategy that has been successful for over 70 years. Don’t stand on the sidelines, join SESLOC and score great benefits that include:

With no minimum balance *

You can become a member if you live, work or attend school in San Luis Obispo County or Northern Santa Barbara County. * Membership required. ** When you use your SESLOC debit card at any CO-OP Network ATM.

TALLEY FARMS AND THE

Sign up for our Family Produce Box Subscription Program at

KVEC IS PROUD TO SUPPORT EAGLE FOOTBALL. CATCH GAMES ON AIR OR STREAMING AT KVEC.COM

Thank you for your continued dedication and support of Arroyo Grande High School Athletics. 29

ABOVE ALL, A GOOD ROOF

FOR SUPPORTING OUR PLAYERS OF THE WEEK! Dine In • Carry Out • Patio Dining Phone and Fax Orders Welcome • Catering for All Occasions • Open Mon-Sat 10:am-8:30pm Sun 10am-4pm

203 East Branch Street In the Village of Arroyo Grande

FOR ALL YOUR RESIDENTIAL &amp; COMMERCIAL GLASS &amp; WINDOW NEEDS

Let me help protect you before mayhem strikes. From a tree branch falling on your car during a windstorm to a GPS that sends you the wrong way down a one-way, mayhem can strike anytime. So get an Allstate Agent like me who knows how to help you make sure you’re protected. Don’t wait—call me today!

As a proud Eagle Alum and Eagle supporter, Daniel Rohr, CPA/PFS, EA, wishes the best of luck to the AG Football team this season! Rohr &amp; Associates has been providing accounting, tax, �inancial planning and consulting services to clients on the Central Coast since 1998. stay on top of it all and to help guide them through all of life’s events.

Financial matters can get complicated quickly. That’s why the professionals at Rohr &amp; Associates are always here for you. If you have any questions or concerns, just let us know about it. Our client’s keep in touch with us throughout the year to help them stay on top of it all and to help guide them through all of life’s events. CPA Services Include: Individual Tax Filing Business Tax Filing Estate Planning Retirement Planning Personal Financial Planning Bookkeeping Services Payroll Services Quickbooks Consulting CFO Offerings

Call Us Today For A Free 15 Minute Consultation 49

Welcome to an exciting season of Eagle Football!

The last few seasons have been not only successful, with both CIF and League titles, but simply great football. This is made possible by a dedicated staff of coaches, players and mostly, by the support of our Eagle Community! Thank you for helping Eagle Pride soar!

Our concession stand invites you to enjoy delicious bbq tri-tip and other items served by volunteers from all our athletic teams. Want something sweet? Check out the Bandâ&amp;#x20AC;&amp;#x2122;s Concession Stand for hot cider, churros and other sweet treats.

Shop for your favorite Eagle Merchandise! We have official Eagle T-shirts, Sweatshirts, Jackets, Hats, Stadium Chairs and more! Stop by our merchandise table next to the concession stand!

The single most important thing you can do is become a Booster Member!! 100% of your Booster donation goes straight to the athletic programs. Personal and Business Memberships are available at our website: aghsboosters.org. Meetings are the 2nd Monday of the month, 6:30pm in the MPR. Hope to see you there!

Itâ&amp;#x20AC;&amp;#x2122;s no joke, our Auction is scheduled for March. This is our major fundraiser of the year and we are hoping to break previous records in fundraising. Watch for announcements on the Date!

If you have any questions regarding Boosters, membership or activities, please email me at kbanksaghs@yahoo.com. Have a great Season! Kim Banks, President

Look for us on FACEBOOK. Grab a friend and volunteer to work in the Concessions Stand.

SUPPORT YOUR LOCAL BOOSTER CLUB! BE A BOOSTER!! 50

ARROYO GRANDE VARSITY FOOTBALL THANKS RED DIRT FOR THEIR SUPPORT!!!

Korsgaden Insurance Where Service is a Commitment

Dedicated Service for over 50 Years 57

WE’RE MORE THAN A GROCERY STORE.

WE ARE PART OF THE COMMUNITY! Homeowners | Contractors | Businessmen

2017 GOLDEN EAGLES The 2017 edition of Golden Eagle Testing, which puts players against each other in the lifting and running events listed below, was a very exciting experience for all involved. Beginning in 2010, we added and combined some of the events, creating a total of eleven scores, with the lowest being dropped. The players with 100 points or greater become Golden Eagles. This year produced great competition amongst the team with 15 players receiving the coveted Golden Eagle title. 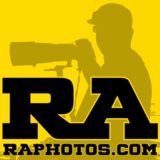