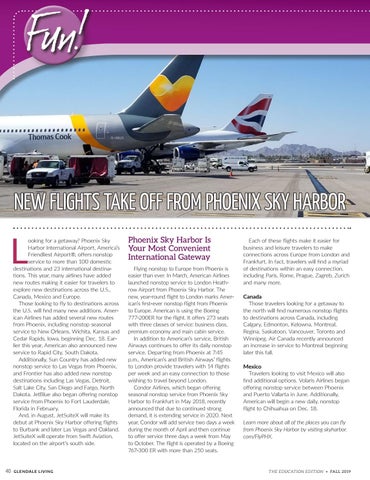 Phoenix Sky Harbor Is Your Most Convenient International Gateway Flying nonstop to Europe from Phoenix is easier than ever. In March, American Airlines launched nonstop service to London Heathrow Airport from Phoenix Sky Harbor. The new, year-round flight to London marks American’s first-ever nonstop flight from Phoenix to Europe. American is using the Boeing 777-200ER for the flight. It offers 273 seats with three classes of service: business class, premium economy and main cabin service. In addition to American’s service, British Airways continues to offer its daily nonstop service. Departing from Phoenix at 7:45 p.m., American’s and British Airways’ flights to London provide travelers with 14 flights per week and an easy connection to those wishing to travel beyond London. Condor Airlines, which began offering seasonal nonstop service from Phoenix Sky Harbor to Frankfurt in May 2018, recently announced that due to continued strong demand, it is extending service in 2020. Next year, Condor will add service two days a week during the month of April and then continue to offer service three days a week from May to October. The flight is operated by a Boeing 767-300 ER with more than 250 seats.

Each of these flights make it easier for business and leisure travelers to make PHOTO BY GARRETT COOK PHOTOGRAPHY connections across Europe from London and Frankfurt. In fact, travelers will find a myriad of destinations within an easy connection, including Paris, Rome, Prague, Zagreb, Zurich and many more. Canada Those travelers looking for a getaway to the north will find numerous nonstop flights to destinations across Canada, including Calgary, Edmonton, Kelowna, Montreal, Regina, Saskatoon, Vancouver, Toronto and Winnipeg. Air Canada recently announced an increase in service to Montreal beginning later this fall. Mexico Travelers looking to visit Mexico will also find additional options. Volaris Airlines began offering nonstop service between Phoenix and Puerto Vallarta in June. Additionally, American will begin a new daily, nonstop flight to Chihuahua on Dec. 18. Learn more about all of the places you can fly from Phoenix Sky Harbor by visiting skyharbor. com/FlyPHX.