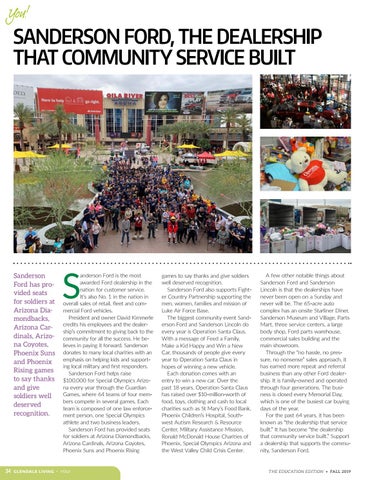 anderson Ford is the most awarded Ford dealership in the nation for customer service. It’s also No. 1 in the nation in overall sales of retail, fleet and commercial Ford vehicles. President and owner David Kimmerle credits his employees and the dealership’s commitment to giving back to the community for all the success. He believes in paying it forward. Sanderson donates to many local charities with an emphasis on helping kids and supporting local military and first responders. Sanderson Ford helps raise $100,000 for Special Olympics Arizona every year through the Guardian Games, where 64 teams of four members compete in several games. Each team is composed of one law enforcement person, one Special Olympics athlete and two business leaders. Sanderson Ford has provided seats for soldiers at Arizona Diamondbacks, Arizona Cardinals, Arizona Coyotes, Phoenix Suns and Phoenix Rising

games to say thanks and give soldiers well deserved recognition. Sanderson Ford also supports Fighter Country Partnership supporting the men, women, families and mission of Luke Air Force Base. The biggest community event Sanderson Ford and Sanderson Lincoln do every year is Operation Santa Claus. With a message of Feed a Family, Make a Kid Happy and Win a New Car, thousands of people give every year to Operation Santa Claus in hopes of winning a new vehicle. Each donation comes with an entry to win a new car. Over the past 18 years, Operation Santa Claus has raised over $10-million-worth of food, toys, clothing and cash to local charities such as St Mary’s Food Bank, Phoenix Children’s Hospital, Southwest Autism Research & Resource Center, Military Assistance Mission, Ronald McDonald House Charities of Phoenix, Special Olympics Arizona and the West Valley Child Crisis Center.

A few other notable things about Sanderson Ford and Sanderson Lincoln is that the dealerships have never been open on a Sunday and never will be. The 65-acre auto complex has an onsite Starliner Diner, Sanderson Museum and Village, Parts Mart, three service centers, a large body shop, Ford parts warehouse, commercial sales building and the main showroom. Through the “no hassle, no pressure, no nonsense” sales approach, it has earned more repeat and referral business than any other Ford dealership. It is family-owned and operated through four generations. The business is closed every Memorial Day, which is one of the busiest car buying days of the year. For the past 64 years, it has been known as “the dealership that service built.” It has become “the dealership that community service built.” Support a dealership that supports the community, Sanderson Ford.