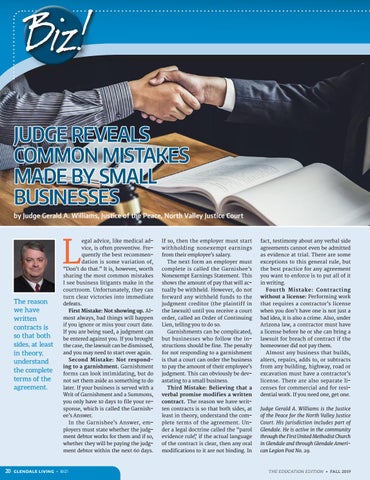 L The reason we have written contracts is so that both sides, at least in theory, understand the complete terms of the agreement.

egal advice, like medical advice, is often preventive. Frequently the best recommendation is some variation of, “Don’t do that.” It is, however, worth sharing the most common mistakes I see business litigants make in the courtroom. Unfortunately, they can turn clear victories into immediate defeats. First Mistake: Not showing up. Almost always, bad things will happen if you ignore or miss your court date. If you are being sued, a judgment can be entered against you. If you brought the case, the lawsuit can be dismissed, and you may need to start over again. Second Mistake: Not responding to a garnishment. Garnishment forms can look intimidating, but do not set them aside as something to do later. If your business is served with a Writ of Garnishment and a Summons, you only have 10 days to file your response, which is called the Garnishee’s Answer. In the Garnishee’s Answer, employers must state whether the judgment debtor works for them and if so, whether they will be paying the judgment debtor within the next 60 days.

If so, then the employer must start withholding nonexempt earnings from their employee’s salary. The next form an employer must complete is called the Garnishee’s Nonexempt Earnings Statement. This shows the amount of pay that will actually be withheld. However, do not forward any withheld funds to the judgment creditor (the plaintiff in the lawsuit) until you receive a court order, called an Order of Continuing Lien, telling you to do so. Garnishments can be complicated, but businesses who follow the instructions should be fine. The penalty for not responding to a garnishment is that a court can order the business to pay the amount of their employee’s judgment. This can obviously be devastating to a small business. Third Mistake: Believing that a verbal promise modifies a written contract. The reason we have written contracts is so that both sides, at least in theory, understand the complete terms of the agreement. Under a legal doctrine called the “parol evidence rule,” if the actual language of the contract is clear, then any oral modifications to it are not binding. In

fact, testimony about any verbal side agreements cannot even be admitted as evidence at trial. There are some exceptions to this general rule, but the best practice for any agreement you want to enforce is to put all of it in writing. Fourth Mistake: Contracting without a license: Performing work that requires a contractor’s license when you don’t have one is not just a bad idea, it is also a crime. Also, under Arizona law, a contractor must have a license before he or she can bring a lawsuit for breach of contract if the homeowner did not pay them. Almost any business that builds, alters, repairs, adds to, or subtracts from any building, highway, road or excavation must have a contractor’s license. There are also separate licenses for commercial and for residential work. If you need one, get one. Judge Gerald A. Williams is the Justice of the Peace for the North Valley Justice Court. His jurisdiction includes part of Glendale. He is active in the community through the First United Methodist Church in Glendale and through Glendale American Legion Post No. 29.