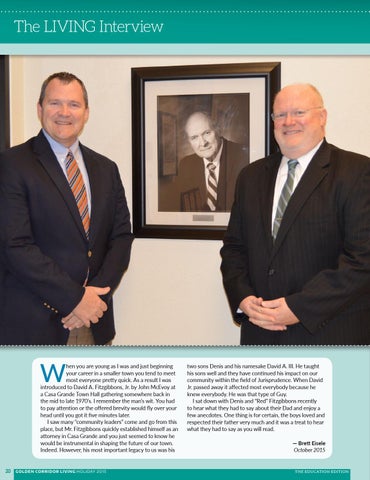 hen you are young as I was and just beginning your career in a smaller town you tend to meet most everyone pretty quick. As a result I was introduced to David A. Fitzgibbons, Jr. by John McEvoy at a Casa Grande Town Hall gathering somewhere back in the mid to late 1970’s. I remember the man’s wit. You had to pay attention or the offered brevity would fly over your head until you got it five minutes later. I saw many “community leaders” come and go from this place, but Mr. Fitzgibbons quickly established himself as an attorney in Casa Grande and you just seemed to know he would be instrumental in shaping the future of our town. Indeed. However, his most important legacy to us was his

two sons Denis and his namesake David A. III. He taught his sons well and they have continued his impact on our community within the field of Jurisprudence. When David Jr. passed away it affected most everybody because he knew everybody. He was that type of Guy. I sat down with Denis and “Red” Fitzgibbons recently to hear what they had to say about their Dad and enjoy a few anecdotes. One thing is for certain, the boys loved and respected their father very much and it was a treat to hear what they had to say as you will read. — Brett Eisele October 2015

THE THE EDUCATION EDUCATIONEDITION EDITION