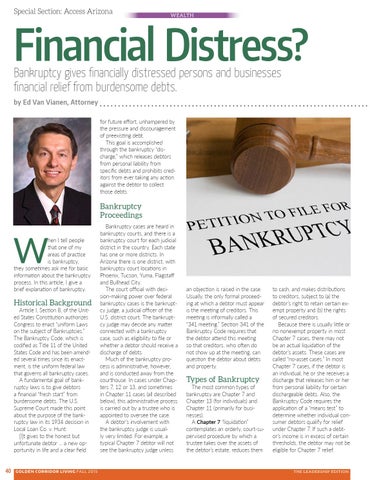 Financial Distress? Bankruptcy gives financially distressed persons and businesses financial relief from burdensome debts. by Ed Van Vianen, Attorney for future effort, unhampered by the pressure and discouragement of preexisting debt. This goal is accomplished through the bankruptcy “discharge,” which releases debtors from personal liability from specific debts and prohibits creditors from ever taking any action against the debtor to collect those debts.

hen I tell people that one of my areas of practice is bankruptcy, they sometimes ask me for basic information about the bankruptcy process. In this article, I give a brief explanation of bankruptcy.

Historical Background Article I, Section 8, of the United States Constitution authorizes Congress to enact “uniform Laws on the subject of Bankruptcies.” The Bankruptcy Code, which is codified as Title 11 of the United States Code and has been amended several times since its enactment, is the uniform federal law that governs all bankruptcy cases. A fundamental goal of bankruptcy laws is to give debtors a financial “fresh start” from burdensome debts. The U.S. Supreme Court made this point about the purpose of the bankruptcy law in its 1934 decision in Local Loan Co. v. Hunt: [I]t gives to the honest but unfortunate debtor ... a new opportunity in life and a clear field

an objection is raised in the case. Usually, the only formal proceeding at which a debtor must appear is the meeting of creditors. This meeting is informally called a “341 meeting.” Section 341 of the Bankruptcy Code requires that the debtor attend this meeting so that creditors, who often do not show up at the meeting, can question the debtor about debts and property.

The most common types of bankruptcy are Chapter 7 and Chapter 13 (for individuals) and Chapter 11 (primarily for businesses). A Chapter 7 “liquidation” contemplates an orderly, court-supervised procedure by which a trustee takes over the assets of the debtor’s estate, reduces them

to cash, and makes distributions to creditors, subject to (a) the debtor’s right to retain certain exempt property and (b) the rights of secured creditors. Because there is usually little or no nonexempt property in most Chapter 7 cases, there may not be an actual liquidation of the debtor’s assets. These cases are called “no-asset cases.” In most Chapter 7 cases, if the debtor is an individual, he or she receives a discharge that releases him or her from personal liability for certain dischargeable debts. Also, the Bankruptcy Code requires the application of a “means test” to determine whether individual consumer debtors qualify for relief under Chapter 7. If such a debtor’s income is in excess of certain thresholds, the debtor may not be eligible for Chapter 7 relief.