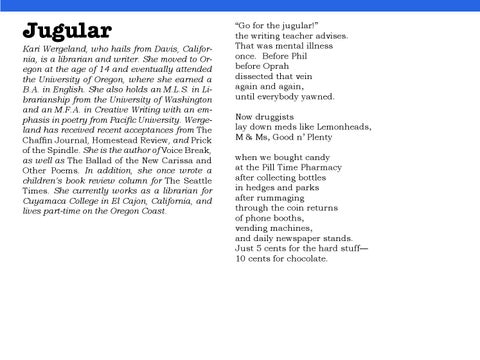 Kari Wergeland, who hails from Davis, California, is a librarian and writer. She moved to Oregon at the age of 14 and eventually attended the University of Oregon, where she earned a B.A. in English. She also holds an M.L.S. in Librarianship from the University of Washington and an M.F.A. in Creative Writing with an emphasis in poetry from Pacific University. Wergeland has received recent acceptances from The Chaffin Journal, Homestead Review, and Prick of the Spindle. She is the author of Voice Break, as well as The Ballad of the New Carissa and Other Poems. In addition, she once wrote a children’s book review column for The Seattle Times. She currently works as a librarian for Cuyamaca College in El Cajon, California, and lives part-time on the Oregon Coast.

“Go for the jugular!” the writing teacher advises. That was mental illness once. Before Phil before Oprah dissected that vein again and again, until everybody yawned. Now druggists lay down meds like Lemonheads, M &amp; Ms, Good n’ Plenty when we bought candy at the Pill Time Pharmacy after collecting bottles in hedges and parks after rummaging through the coin returns of phone booths, vending machines, and daily newspaper stands. Just 5 cents for the hard stuff— 10 cents for chocolate. 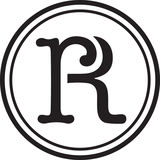