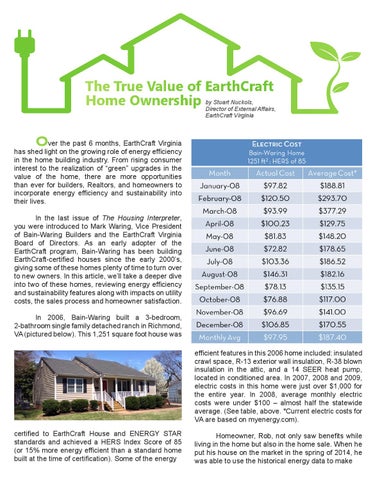 Over the past 6 months, EarthCraft Virginia

has shed light on the growing role of energy efficiency in the home building industry. From rising consumer interest to the realization of “green” upgrades in the value of the home, there are more opportunities than ever for builders, Realtors, and homeowners to incorporate energy efficiency and sustainability into their lives.

In the last issue of The Housing Interpreter, you were introduced to Mark Waring, Vice President of Bain-Waring Builders and the EarthCraft Virginia Board of Directors. As an early adopter of the EarthCraft program, Bain-Waring has been building EarthCraft-certified houses since the early 2000’s, giving some of these homes plenty of time to turn over to new owners. In this article, we’ll take a deeper dive into two of these homes, reviewing energy efficiency and sustainability features along with impacts on utility costs, the sales process and homeowner satisfaction. In 2006, Bain-Waring built a 3-bedroom, 2-bathroom single family detached ranch in Richmond, VA (pictured below). This 1,251 square foot house was efficient features in this 2006 home included: insulated crawl space, R-13 exterior wall insulation, R-38 blown insulation in the attic, and a 14 SEER heat pump, located in conditioned area. In 2007, 2008 and 2009, electric costs in this home were just over $1,000 for the entire year. In 2008, average monthly electric costs were under $100 – almost half the statewide average. (See table, above. *Current electric costs for VA are based on myenergy.com). certified to EarthCraft House and ENERGY STAR standards and achieved a HERS Index Score of 85 (or 15% more energy efficient than a standard home built at the time of certification). Some of the energy

Homeowner, Rob, not only saw benefits while living in the home but also in the home sale. When he put his house on the market in the spring of 2014, he was able to use the historical energy data to make 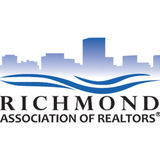