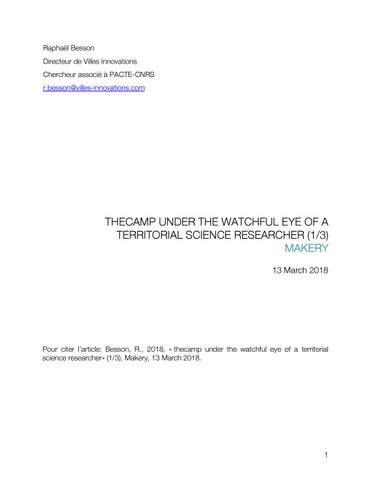 Since its opening in September 2017, Raphaël Besson observes The Hive of thecamp, the international creativity residence of the innovation campus in Aix-en-Provence (France). Column of a specific ecosystem. A major objective of my immersion in thecamp is to measure the methods, the socio-spatial and functional configurations of this ecosystem, to identify its capacity to generate disruptive innovations. From September 2017, I observed collaborative sessions as well as productions of The Hive, the international creativity residence of Aix-en-Provence innovation campus (France) and interviewed the Hivers (Makery visited it before its opening).

7-hectare site facing the Mont Sainte-Victoire. © Raphaël Besson Developed by the Aixois entrepreneur, Frédéric Chevalier, founder of the HighCo group, the innovation campus called thecamp, is located on a 7-hectare site facing the Mont Saint Victoir, on the Arbois Mediterranean Environment Technopole near Aix-en-Provence. The objective is to stimulate exchanges within a diversity of players (entrepreneurs, researchers and creators) so as to “hallucinate the future”, and invent the models corresponding to the major issues and transitions of tomorrow: new technologies, ecological crises, city explosion, educational mutations etc.

On this billboard: “This is a space that doesn’t exist, so we decided to make it”. © Raphaël Besson Thecamp, as conceived by Frédéric Chevallier is a “unique”, “open” and “extraordinary” place. On site, billboards relay the remarkable dimension dream of its founder: “This is a space that doesn’t exist, so we decided to make it”, “And what if, just to be different, we were inspired by what has never been done before?” Thecamp is conceived as an intermediary space: “hybrid”, “transdisciplinary, transcultural and transgenerational”. For that matter, the site managers often define it in negatives: “neither a university, nor a research centre”, “neither a start-up incubator nor a permanent training centre for managers and directors”, “neither a haven for young artists nor a summer camp”, “neither a laboratory for new technologies, nor a centre for seminars and events”. At first, the situation seems familiar with its numerous references to territorial innovation models: campuses, clusters or technopoles. Its position at the crossroads of research, entrepreneurship, commerce, creativity and even science fiction, calls for revisiting a certain number of binary oppositions and the common spaces running through the universe of sciences and knowledge.

Thecamp is based on an aesthetic of openness. © Raphaël Besson Particularly: that sciences and innovations are especially the result of scientists and inventers objectively thinking while isolated and separated from any social life; that innovations are only intellectual and conceptual affaires in so much as knowhow, traditional uses of materials, craftsmanship or artistic practices would be unable to play a decisive role; that the expansion of sciences and discoveries could not be fundamentally associated with commerce and the business world; that the generalised development of digital technologies would necessarily lead to closure of spaces devoted to knowledge and to innovation. The margin space Far from the today’s tendency to concentrate innovation spaces in the heart of complex, hyperconnected urban systems, thecamp is located in an area withdrawn from urban emulation. Within thecamp, one has exited the gates of the city to find time to think, away from constantly accelerating digital, technological and social ecosystems. On site, lodging is available in small rooms of monastic inspiration located in a “ribbon of buildings”, a sort of barrier between the urbanised zone and the project itself. Thecamp thereby integrates a certain insular philosophy, which traverses the history of learning places. From monasteries to the first universities, passing

study areas, laboratories, campuses or techno-poles, flourishing knowledge has first been thought out in isolated areas removed from social and urban life. But this does not mean that thecamp sees itself as an introverted, self-sufficient community. First, because the site has a high bandwidth optical fibre link and is 15 minutes from the TGV (Fast Train Station) and the Marseille-Provence Airport; then, because thecamp provides many convivial places for socialising. The architecture conceived by Corinne Vezzoni is based on an aesthetic of transparency and openness (large picture windows, patios, circular spaces, broad walkways…), so as to encourage movement and exchanges among researchers, manufacturers, artists, designers and students. The structure, composed of thirteen glass and concrete cylinders of different diameters, beneath a 10m-high, white canopy, generates a particular atmosphere, proper to liberating “energy circulation” and the imaginary. It functions as a living ecosystem, “a confined and protected place enabling eggs or bacteria to develop more rapidly” (Corinne Vezzoni).

At the restaurant, only vegeterian menu is available. © Raphaël Besson The structure houses a multitude of programs: 150 lodgings, bar, restaurant, amphitheatres, multisport and event spaces, an ecological swimming pool, a showroom, classrooms, an incubator, modular testing space (PopUp House), think/do tanks and a fab lab, rooms for work by teams or

by project, a small-business nursery and an international creative residence (The Hive). Thecamp spaces may also be appreciated in virtual reality, as VR headsets are available for visitors. Accordingly, thecamp positions itself as a margin space, at once isolated and connected, real and virtual, local et global, an area at the interface of city and country assembling multiple and potentially divergent ecosystems. As such, thecamp joins the category of intermediary spaces: the “third spaces”, the “go betweens” and other “contact zones”. Knowledge and the art of doing Thecamp calls for a closer look at a very ancient dichotomy, which develops between sciences and knowledge, between pure science and the expertise of action, between scientific disciplines and artistic practices. Central to thecamp, disciplines, schools or scientific fields will be less important in elaborating learning and innovation processes, than the logics of transmission, exchange, adaptation, translation or hybridising. Knowledge is seen as a circulation system for problems and ideas from one place to another. Knowhow and inventions are produced, tested and validated in a context of open innovation methods, immersive experiences, prototyping spaces and ideation, collaborative events or creative and entrepreneurial programs.

Hivers» into a design thinking exercise. © thecamp These different situations sideline a purely ideal conception of knowledge, by defending one that is equally material, experimental and experiential. Prototyping tools, VR technologies, methods of design thinking or of design fiction produce new narratives and realities, which permit exploring the future and re-questioning certainties from disjointed viewpoints. At the heart of thecamp, knowledge is also the “art of doing”. This, is the total reason for the residence The Hive, which enables twenty talents from the world over (hackers, coders, fab managers, designers, graphic facilitators, engineers, innovation managers, …), to open new creative paths for researchers as well as public et private leaders, by offering «a disruptive view of the world ». The Hive is reminiscent of other art-science residences, which have developed these last years within the Massachusetts Institute of Technology (MIT) in Boston, the A10lab in London, the Medialab Prado in Madrid, or the art-science workshop in Grenoble. The first residence began in September 2017 (twelve nationalities are present today). For six months, The Hivers are to collaborate with thecamp’s ecosystem, to develop common projects and prototypes on the theme of oceans, education, or mobility. For this, a collection of tools and

resources, both technological and financial, are at their disposal as well as a team of mentors including Eric Viennot (French pioneer in narrative video games), Sylvia Andriantsimahavandy (advisor in cultural engineering), Djeff Regottaz (digital artist) and Tiphaine Pitoiset, (innovation manager).

First prototypes at The Hive. ÂŠ thecamp Knowledge and business Within thecamp, knowledge and business are permanently mixed in solving the five â&#x20AC;&#x153;great universal challengesâ&#x20AC;? namely: sustainable mobility, quality life in cities, clean energy, protected oceans and the future of education. Creation of this contact zone should significantly upscale innovations and their positive impacts. In such a quest for scalable innovation susceptible to being generalised, it is imperative that entrepreneurs and big business be associated very early in the research processes to identify sustainable economic models.

This innovation campus itself falls under a calculated economical logic. Its initial cost is considerable, situated around €80 million: €40 million for the buildings and €40 million for the first years of operation. Frédéric Chevalier personally invested €12 million Euros in the project. Thecamp has over 60 salaried employees and programs like The Hive are not directly profitable: (The Hivers are lodged and compensated for six months). Then, because thecamp is registered as a publicprivate entity associating community organisations, it has a wide partnership base (including the Crédit Agricole Alpes-Provence Bank, the Deposit and Loan Fund, Sodexo, Vinci…). Other financial resources will come to complete this economic model with start-up incubation (thecamp will withdraw de 3 to 5% of the capital), international acceleration and development of young businesses, creative workshops or training sessions.

The Hive is not directly profitable: The Hivers are lodged and compensated for six months. © thecamp Furthermore, it is probable that modes of non-commercial exchange with thecamp, based on sharing, open source, offers, trading or confidence, will, at term play a deciding role in the value creation process. In a cognitive economy, value-creating knowledge cannot be computerised or

coded because it is tacit or implicit. This knowledge is intimately associated with individuals, with their subjectivity and their capacity to collaborate among themselves. Thus, thecamp is creating the conditions for expanding collective intelligence, so as to continually produce new knowledge, and finally inventions yet unknown and highly valuable on the markets. Far from going back to binary oppositions (insularity vs openness; sciences vs knowledge; scientific disciplines vs artistic practices; universe of science and knowledge vs universe of markets), thecamp has put itself in a middle position, a place of friction and interaction among multiple dynamics, interests and stakes. Points of tension and of friction are therefore potentially numerous. How is a â&#x20AC;&#x153;community createdâ&#x20AC;? without cutting off society and the local anchor, thecamp? Can new modes of work and production founded on collaborative and horizontal relations be promoted while avoiding dystopias described in film and series like The Circle or Black Mirror? How is it possible to conserve and promote a culture of experimentation and disruption while seeking scalable innovations, meaning their capacity to remain efficient while changing scale? How can really collaborative, open innovations be produced in answer to the worldâ&#x20AC;&#x2122;s great challenges while economically valorising certain products freely developed using collaboration and open sources? It will be the next episode!