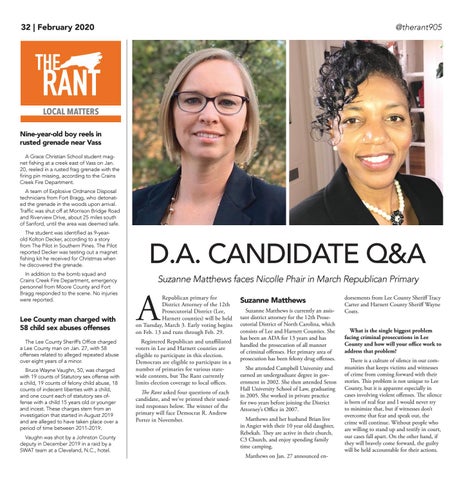 LOCAL MATTERS Nine-year-old boy reels in rusted grenade near Vass A Grace Christian School student magnet fishing at a creek east of Vass on Jan. 20, reeled in a rusted frag grenade with the firing pin missing, according to the Crains Creek Fire Department. A team of Explosive Ordnance Disposal technicians from Fort Bragg, who detonated the grenade in the woods upon arrival. Traffic was shut off at Morrison Bridge Road and Riverview Drive, about 25 miles south of Sanford, until the area was deemed safe. The student was identified as 9-yearold Kolton Decker, according to a story from The Pilot in Southern Pines. The Pilot reported Decker was testing out a magnet fishing kit he received for Christmas when he discovered the grenade. In addition to the bomb squad and Crains Creek Fire Department, emergency personnel from Moore County and Fort Bragg responded to the scene. No injuries were reported.

Lee County man charged with 58 child sex abuses offenses The Lee County Sheriff’s Office charged a Lee County man on Jan. 27, with 58 offenses related to alleged repeated abuse over eight years of a minor. Bruce Wayne Vaughn, 50, was charged with 19 counts of Statutory sex offense with a child, 19 counts of felony child abuse, 18 counts of indecent liberties with a child, and one count each of statutory sex offense with a child 15 years old or younger and incest. These charges stem from an investigation that started in August 2019 and are alleged to have taken place over a period of time between 2011-2019. Vaughn was shot by a Johnston County deputy in December 2019 in a raid by a SWAT team at a Cleveland, N.C., hotel.

Republican primary for District Attorney of the 12th Prosecutorial District (Lee, Harnett counties) will be held on Tuesday, March 3. Early voting begins on Feb. 13 and runs through Feb. 29. Registered Republican and unaffiliated voters in Lee and Harnett counties are eligible to participate in this election. Democrats are eligible to participate in a number of primaries for various statewide contests, but The Rant currently limits election coverage to local offices. The Rant asked four questions of each candidate, and we’ve printed their unedited responses below. The winner of the primary will face Democrat R. Andrew Porter in November.

Suzanne Matthews Suzanne Matthews is currently an assistant district attorney for the 12th Prosecutorial District of North Carolina, which consists of Lee and Harnett Counties. She has been an ADA for 13 years and has handled the prosecution of all manner of criminal offenses. Her primary area of prosecution has been felony drug offenses. She attended Campbell University and earned an undergraduate degree in government in 2002. She then attended Seton Hall University School of Law, graduating in 2005. She worked in private practice for two years before joining the District Attorney’s Office in 2007. Matthews and her husband Brian live in Angier with their 10 year old daughter, Rebekah. They are active in their church, C3 Church, and enjoy spending family time camping. Matthews on Jan. 27 announced en-

dorsements from Lee County Sheriff Tracy Carter and Harnett County Sheriff Wayne Coats. What is the single biggest problem facing criminal prosecutions in Lee County and how will your office work to address that problem? There is a culture of silence in our communities that keeps victims and witnesses of crime from coming forward with their stories. This problem is not unique to Lee County, but it is apparent especially in cases involving violent offenses. The silence is born of real fear and I would never try to minimize that, but if witnesses don’t overcome that fear and speak out, the crime will continue. Without people who are willing to stand up and testify in court, our cases fall apart. On the other hand, if they will bravely come forward, the guilty will be held accountable for their actions. 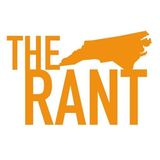 The February 2020 edition of The Rant Monthly, a publication of LPH Media LLC in Sanford, North Carolina.

The February 2020 edition of The Rant Monthly, a publication of LPH Media LLC in Sanford, North Carolina.