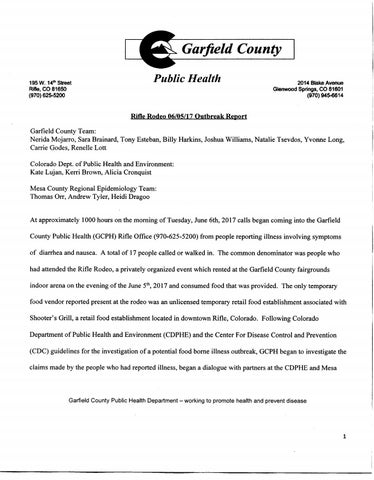 At approximately 1000 hours on the morning of Tuesday, June 6th, 2017 calls began coming into the Garfield

County Public Health( GCPH) Rifle Office ( 970- 625- 5200) from people reporting illness involving symptoms of diarrhea and nausea. A total of 17 people called or walked in. The common denominator was people who

had attended the Rifle Rodeo, a privately organized event which rented at the Garfield County fairgrounds

indoor arena on the evening of the June 5th, 2017 and consumed food that was provided. The only temporary food vendor reported present at the rodeo was an unlicensed temporary retail food establishment associated with Shooter' s Grill, a retail food establishment located in downtown Rifle, Colorado. Following Colorado Department of Public Health and Environment( CDPHE) and the Center For Disease Control and Prevention CDC) guidelines for the investigation of a potential food borne illness outbreak, GCPH began to investigate the

claims made by the people who had reported illness, began a dialogue with partners at the CDPHE and Mesa

County Regional Epidemiology Team ( MCRET) for investigation assistance in the matter, and alerted the public information officer, as well as the public health director of the situation. GCPH began an environmental health investigation. MCRET created a Line List, an epidemiological tool used to collect reported data, and

shared between investigation partner agencies using Google Spreadsheets. By about 1600 hours on June 6th, the reported ill had increased to 30 and there were reports of additional symptoms; cramps, bloody stool. Average symptom onset was determined to be 6 to 8 hours. Based on reported symptoms, the number of people

reporting illness and eating food at the rodeo, and short interval between the rodeo and symptom onset, MCERT

suspected that food poisoning as the cause of the outbreak. GCPH also contacted local hospitals, Valley View and Grand River and their Infectious Disease Control and Emergency Departments and alerted them to be aware of the outbreak so that stool samples could be collected from any patient arriving at the hospital presenting the reported symptoms.

On the morning of June 7th, the collaborating investigation partners held a conference call at 1000 hours. The environmental investigation conducted by GCPH on the afternoon of June 6th revealed that the pork served at the rodeo was smoked at Smokehouse 1776, a retail food establishment located in downtown Rifle, Colorado

the establishments, but the owner and staff informed GCPH that there was no food product left that had been

available by the owner and staff and packaged and shipped the samples to the CDPHE laboratory in Denver, Colorado via courier service on the afternoon of June 6th. GCPH reviewed both implicated retail food

establishments, Shooter' s Grill and Smokehouse 1776, where the suspect food was prepared. Food safety practices at the temporary event( Rifle Rodeo) were discussed with owner and employees. Food safety

concerns and violations were revealed during this discussion and included no cold holding, no hot holding, the facility does not maintain temperature logs so there was no way of showing that food was kept at proper temperatures, bare hand contact with ready to eat foods, no handwashing station, no barrier protection from insects, only one pair of tongs on site, no event coordinator paperwork completed prior to the event occurrence,

the rodeo. GCPH attempted to contact the Rifle Rodeo event coordinator for questioning, with no success. The time of food service at the rodeo was approximately 1700 hours until 2000 hours and occurred within the indoor arena located on the Garfield County Fairgrounds. All partners involved agreed that a press release was needed

to ask attendees of the Rifle Rodeo on June 5th, ill or not, to contact GCPH for interviewing. Agencies participating in the investigation held another conference call on the morning of June 8th, 2017 at

1000 hours. The Garfield County Communications Team drafted a press release and it was approved by both partner agencies and county administration for release on June 8th, 2017 at approximately 1530 hours. GCPH

providers, and to Eagle, Moffat, and Mesa Counties because attendees at the rodeo may have been presenting to health care providers in surrounding counties. As of the time of the conference call, the Rifle Rodeo event coordinator had not returned GCPH calls. Additional calls to GCPH had increased, an additional 38 people

reported illness. Call logs of the reported ill now approximately 80 individuals, however GCPH had been able to directly contact and conduct full interviews for 17 of those reporting. MCRET conducted analysis on the

reported data from the Line List tool. Partner Investigative Agencies scheduled another conference call for the

The conference call was held on the morning of June 9th at approximately 1000 hours. The Rifle Rodeo organizer was reported as still unavailable. It has been verified that there was no petting zoo at the rodeo and

Moon Bread, and the supplier was Shamrock Foods. Additional foods have been elicited by interviewers

including baked potato and butter in two forms; these were not initially reported by the food provider. Billy Harkins, EHS III committed to conduct another onsite full inspection at both facilities the afternoon of June 9th.

Lauren Boebert applied for a temporary retail food establishment license on June 8th, 2017, but has not yet been

approved as of yet by GCPH pending completion of the Rifle Rodeo Outbreak investigation. GCPH staff also

committed to be onsite for the Monday, June 12th Rifle Rodeo to assess the situation and try to establish direct contact with the Rifle Rodeo event coordinator. GCPH staff was able to collect one human sample and it was

shipped to CDPHE on June 8th. GCPHE continue to contact local hospitals daily for additional case finding and to communicate updates. Well and additional ill people have contacted GCPH, and have been added to the

spreadsheet, some have been interviewed. Interviewers added names in the appropriate columns in the Line

List to communicate with other investigators who has been contacted and by whom. MCRET stated that as of the morning of June 9th, 2017, preliminary data collected showed the median age was 42. 5 years, with an age range of

18. Also, 100% of those interviewed with diarrhea ate pork sliders.

period was approximately 8 hours. MCRET shared a PDF with GCPH to aid in discussion with GCPH

administration, and sent updates the afternoon of June 9th, and as information changed. Inquiries to GCPH

through the week of June 12th. Total reported ill was 80 individuals. GCPH was able to contact and directly interview 67 individuals.

Analysis of Data from Interviews

MCRET developed and shared a Google- based spreadsheet that GCPH staff modified and completed as they conducted interviews. MCRET used Excel, EpiInfo, and Tableau software to analyze data from 37 persons who

attended the rodeo and reported any illness, and 30 persons who attended the event but did not have any symptoms. From preliminary data, a case definition was defined as anyone who ate at the rodeo and

experienced, diarrhea and/or abdominal cramping within 27 hours of the meal. The results of those analyses are summarized below.

8 to 12 hours), epidemiologists rounded to the shortest onset

range was given ( such as

range was given ( such as

8 to 12 hours), epidemiologists rounded to the shortest duration for

preliminary data, but later data collections were ambiguous and are not included in this analysis The menu provided at the event was limited, and included: cole slaw, potato salad, pulled pork sliders,

between each possible risk factor( exposure) and an outcome ( ill or well). The following 2x2 tables summarize data collected during interviews: 36 of 38 who reported eating sliders became ill; all 36 of

those ill reported eating sliders, suggesting the sliders as the most likely culprit.

Do/ did you have any Yes No

Only three people out of the 67 able to be directly contacted volunteered to provide stool samples. GCPH was

able to collect stool samples from two people that reported eating at the rodeo and getting sick, and one sample

from an individual who reported being at the rodeo, but not eating and not getting sick. On June 14th, Alicia Cronquist, CDPHE laboratory reported that the two samples of the people that ate and got sick showed positive for Clostridium perfringens. The samples tested positive for the toxin that the germ

produces. C perfringens is a leading cause of foodborne illness. Illness happens when a person swallows large

amounts of the bacteria, which then makes a toxin in the intestines that causes abdominal cramps and diarrhea.

The illness usually resolves within a about 24 hours. Illness with C. perfringens occurs when food is left at an

unsafe temperature, bacteria multiply in the food, and the food is consumed. When food is left at unsafe

temperatures, the number of bacteria present in the food can double every fifteen minutes. The positive lab test results led the CDPHE lab to decide to next also test the food samples for C. perfringens.

The results for the food samples came back negative for the bacteria toxin. According to Alicia Cronquist, CDPHE, food testing takes time,

brick and mortar location, but it could not be determined if the food items submitted to the lab for testing was the same as that at the Rifle Rodeo and served to the public. After analyzing discussions had with the proprietor and staff, we do not believe that it was the same food that was served at the rodeo.

After the initial calls in to the health department on the morning of June 6th, Billy Harkins, EHS III contacted the owner of Shooter' s Grill and Smokehouse 1776, Lauren Boebert. He began gathering information on their

operations at the Rifle Rodeo. GCPH learned that Lauren Boebert did not obtain approval or licensing to serve food at the Rodeo. Approval would have required them to obtain a Temporary Retail Food Establishment License. Mr. Harkins visited Shooters Grill, discussed the situation with them, and conducted interviews of the employees and an environmental analysis.

Mr. Harkins obtained samples of the food as directed by the

CDPHE lab. He obtained the samples in a timely manner, packaged, and gave them to Kangaroo Courier

Mr. Harkins conducted full onsite inspections of Shooter' s Grill and of Smokehouse 1776, both licensed Retail Food Establishments where the food provided at the June 5th, 2017 Rifle Rodeo was prepared.

The Investigative Team determined the outbreak to be the result of food poisoning by the bacterium Clostridium perfringens due to consumption of the pork sliders provided to the public by an unlicensed temporary retail food establishment at the Rifle Rodeo on the night of June 5th, 2017. The evidence supports the conclusion that

bacterial contamination was due to improper food safety practices of the unlicensed food providers. According to the CDC, Clostridium perfringens( C. perfringens) is one of the most common causes of food

The illness usually begins suddenly and lasts for less than 24 hours. To prevent

warmer, or at 40° F ( 4. 4° C) or cooler. These temperatures prevent the growth of bacteria that might have

put hot foods directly into the refrigerator. Large pots of food, such as soups, stews, and large cuts of meats,

such as roasts, should be divided into small quantities for refrigeration so they will cool quickly enough to