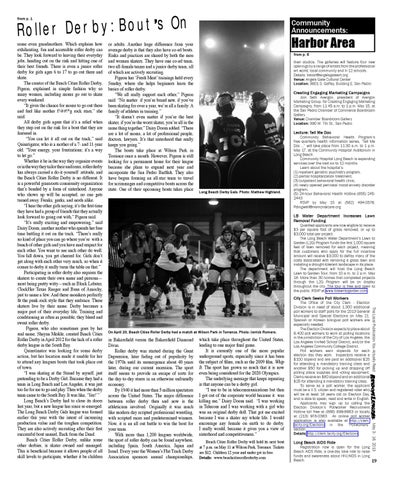 or adults. Another huge difference from your average derby is that they also have co-ed bouts. Rinks and practices are shared by both the men and women skaters. They have one co-ed team, two all-female teams and a junior derby team, all of which are actively recruiting. Pigeon has ‘Fresh Meat’ trainings held every Sunday, where she helps beginners learn the basics of roller derby. “We all really support each other,” Pigeon said. “No matter if you’re brand new, if you’ve been skating for over a year, we’re all a family: A family of athletes in training.” “It doesn’t even matter if you’re the best skater, if you’re the worst skater, you’re all in the same thing together,” Daisy Doom added. “There are a lot of moms, a lot of professional people, doctors, lawyers. It’s that sisterhood that really keeps you going.” The bouts take place at Wilson Park in Torrance once a month. However, Pigeon is still looking for a permanent home for their league because she plans to expand next year and incorporate the San Pedro Badfish. They also have begun forming an all-star team to travel for scrimmages and competitive bouts across the state. One of their upcoming bouts takes place

Qualified applicants are now eligible to receive $3 per square foot of grass removed, or up to $3,000 total per project. The Long Beach Water Department’s Lawn to Garden (L2G) Program funds the first 1,000 square feet of lawn removed for each project, meaning that customers who apply for the full incentive amount will receive $3,000 to defray many of the costs associated with removing a grass lawn and installing a drought-tolerant landscape in its place. The department will host the Long Beach Lawn to Garden Tour, from 10 a.m. to 2 p.m. May 18. More than 30 homes that completed projects through the L2G Program will be on display throughout the city. The tour is free and open to the public. RSVP at www.lblawntogarden.com.

which take place throughout the United States, leading to one major final game. It is currently one of the more popular underground sports, especially since it has been the subject of films, such as the 2009 film, Whip It. The sport has grown so much that it is now even being considered for the 2020 Olympics. The underlying message that keeps repeating is that anyone can be a derby girl. “I use to be in telecommunications but then I got out of the corporate world because it was killing me,” Daisy Doom said. “I was working in Telecom and I was working with a girl who was an original derby doll. That got me excited because I was a skater my whole life. I would encourage any female on earth to do derby. I really would, because it gives you a view of sisterhood and competitiveness.” Beach Cities Roller Derby will hold its next bout at 7 p.m. on May 11 at Wilson Park, Torrance. Tickets are $12. Children 12 year and under get in free. Details: www.beachcitiesrollerderby.com

Registration now is open for the Long Beach AIDS Ride, a one-day bike ride to raise funds and awareness about HIV/AIDS in Long Beach.

in Bakersfield versus the Bakersfield Diamond Divas. Roller derby was started during the Great Depression, later fading out of popularity by the 1970s until its reemergence about 40 years later, during our current recession. The sport itself seems to provide an escape of sorts for the day-to-day stress in an otherwise unfriendly economy. By 1940 it had more than 5 million spectators across the United States. The major difference between roller derby then and now is the athleticism involved. Originally it was much like modern day scripted professional wrestling, with scripted races and predetermined winners. Now, it is an all out battle to win the bout for your team. With more than 1,200 leagues worldwide, the sport of roller derby can be found anywhere, including Spain, South America, Japan and Israel. Every year the Women’s Flat Track Derby Association sponsors annual championships,

The Office of the City Clerk - Election Division is in need of about 1,300 additional poll workers to staff polls for the 2013 General Municipal and Special Elections on May 21. Spanish or Korean bilingual poll workers are especially needed. The Election Division expects to place about 6,400 poll workers to work at polling locations in the jurisdiction of the City of Los Angeles, the Los Angeles Unified School District, and/or the Los Angeles Community College District. Poll workers earn stipends for each election day they work. Inspectors receive a $100 stipend and are paid an additional $25 for attending a mandatory training class and another $50 for picking up and dropping off polling place supplies and voting equipment. Clerks receive an $80 stipend and an additional $25 for attending a mandatory training class. To serve as a poll worker, the applicant must be a U.S. citizen and registered voter who will be at least 18 years old on Election Day, and is able to speak, read and write in English. Applicants may sign up by calling the Election Division’s Pollworker Recruitment Hotline toll free at (866) 899-8683 or locally at (213) 978-0363. An online poll worker application is also available at http://clerk. lacity.org/Elections in the “Pollworkers” section. Details: http://clerk.lacity.org/Elections.

The Local Publication You Actually Read

some even grandmothers. Which explains how exhilarating, fun and accessible roller derby can be. They look forward to leaving their everyday jobs, heading out on the rink and hitting one of their best friends. There is even a junior roller derby for girls ages 6 to 17 to go out there and skate. The creator of the Beach Cities Roller Derby, Pigeon, explained in simple fashion why so many women, including moms go out to skate every weekend. “It gives the chance for moms to go out there and feel like mother f!@#!*g rock stars,” she said. All derby girls agree that it’s a relief when they step out on the rink for a bout that they are featured in. “You can let it all out on the track,” said Quinstigator, who is a mother of a 7- and 11-year old. “Your energy, your frustrations; it’s a way to let go.” Whether it be in the way they organize events or in the way they tailor their uniforms, roller derby has always carried a do-it-yourself attitude, and the Beach Cities Roller Derby is no different. It is a powerful grassroots community organization that’s bonded by a form of sisterhood. Anyone who shows up will be accepted, no one gets turned away. Freaks, geeks, and nerds alike. “I hear the other girls saying, it’s the first time they have had a group of friends that they actually look forward to going out with,” Pigeon said. “It’s really exciting and empowering,” said Daisy Doom, another mother who spends her free time battling it out on the track. “There’s really no kind of place you can go where you’re with a bunch of other girls and you have mad respect for each other. You want to see each other do well. You fall down, you get cheered for. Girls don’t get along with each other very much, so when it comes to derby it really turns the table on that.” Participating in roller derby also requires the skaters to create their own name and persona— most being pretty witty—such as Block Lobster, ClockHer Texas Ranger and Buns of Anarchy, just to name a few. And these monikers perfectly fit the punk-rock style that they embrace. These skaters live by their name. Derby becomes a major part of their everyday life. Training and conditioning as often as possible, they bleed and sweat roller derby. Pigeon, who also sometimes goes by her real name, Shayna Meikle, created Beach Cities Roller Derby in April 2012 for the lack of a roller derby league in the South Bay. Quinstinator was looking for some derby action, but her location made it unable for her to attend any leagues bouts that took place out of town. “I was skating at the Strand by myself, just pretending to be a Derby Girl. Because they had a team in Long Beach and Los Angeles, it was just too far for me to go and play. Then when the derby team came to the South Bay. It was like, ‘Yes!’” Long Beach’s Derby had to close its doors last year, but a new league has since re-emerged. The Long Beach Derby Gals league was formed earlier this year with the intent of increasing production value and the toughen competition. They are also actively recruiting after their first successful bout named, Back from the Dead. Beach Cities Roller Derby, unlike some other derbies, is skater owned and managed. This is beneficial because it allows people of all skill levels to participate, whether it be children 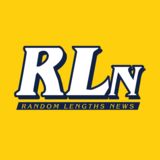 BOUT TIME Roller Derby Is Back!

BOUT TIME Roller Derby Is Back!