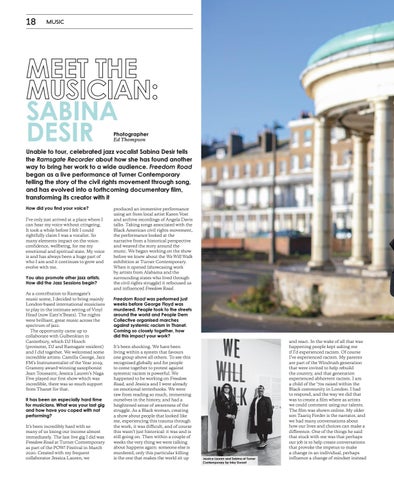 Unable to tour, celebrated jazz vocalist Sabina Desir tells the Ramsgate Recorder about how she has found another way to bring her work to a wide audience. Freedom Road began as a live performance at Turner Contemporary telling the story of the civil rights movement through song, and has evolved into a forthcoming documentary film, transforming its creator with it How did you find your voice? I’ve only just arrived at a place where I can hear my voice without cringeing. It took a while before I felt I could rightfully claim I was a vocalist. So many elements impact on the voice: confidence, wellbeing, for me my emotional and spiritual state. My voice is and has always been a huge part of who I am and it continues to grow and evolve with me.

You also promote other jazz artists. How did the Jazz Sessions begin? As a contribution to Ramsgate’s music scene, I decided to bring mainly London-based international musicians to play in the intimate setting of Vinyl Head (now Eats’n’Beats). The nights were brilliant, great music across the spectrum of jazz. The opportunity came up to collaborate with Gulbenkian in Canterbury, which DJ Hooch (promoter, DJ and Ramsgate resident) and I did together. We welcomed some incredible artists: Camilla George, Jazz FM’s Instrumentalist of the Year 2019; Grammy award-winning saxophonist Jean Toussaint; Jessica Lauren’s Naga Five played our first show which was incredible, there was so much support from Thanet for that.

It has been an especially hard time for musicians. What was your last gig and how have you coped with not performing? It’s been incredibly hard with so many of us losing our income almost immediately. The last live gig I did was Freedom Road at Turner Contemporary as part of the POW! Festival in March 2020. Created with my frequent collaborator Jessica Lauren, we

produced an immersive performance using art from local artist Karen Vost and archive recordings of Angela Davis talks. Taking songs associated with the Black American civil rights movement, the performance looked at the narrative from a historical perspective and weaved the story around the music. We began working on the show before we knew about the We Will Walk exhibition at Turner Contemporary. When it opened (showcasing work by artists from Alabama and the surrounding states who lived through the civil rights struggle) it refocused us and influenced Freedom Road.

Freedom Road was performed just weeks before George Floyd was murdered. People took to the streets around the world and People Dem Collective organised marches against systemic racism in Thanet. Coming so closely together, how did this impact your work? It’s been shocking. We have been living within a system that favours one group above all others. To see this recognised globally and for people to come together to protest against systemic racism is powerful. We happened to be working on Freedom Road, and Jessica and I were already on emotional tenterhooks. We were raw from reading so much, immersing ourselves in the history, and had a heightened sense of awareness of the struggle. As a Black woman, creating a show about people that looked like me, experiencing this trauma through the work, it was difficult, and of course this wasn’t just historical: it was and is still going on. Then within a couple of weeks the very thing we were talking about happens again: someone else is murdered, only this particular killing is the one that makes the world sit up

Jessica Lauren and Sabina at Turner Contemporary by Inky Durant

and react. In the wake of all that was happening people kept asking me if I’d experienced racism. Of course I’ve experienced racism. My parents are part of the Windrush generation that were invited to help rebuild the country, and that generation experienced abhorrent racism. I am a child of the ’70s raised within the Black community in London. I had to respond, and the way we did that was to create a film where as artists we could comment using our talents. The film was shown online. My older son Taariq Forder is the narrator, and we had many conversations about how our lives and choices can make a difference. One of the things he said that stuck with me was that perhaps our job is to help create conversations that provoke the impetus to make a change in an individual, perhaps influence a change of mindset instead 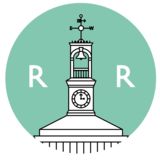