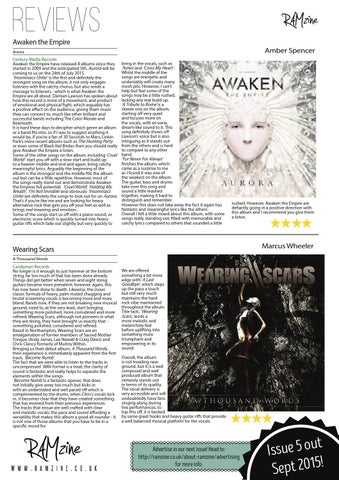 Century Media Records Awaken the Empire have released 4 albums since they started in 2009 and the anticipated 5th, Aurora will be coming to us on the 24th of July 2015. ‘Insomniacs Unite’ is the first and definitely the strongest song on the album, it not only engages listeners with the catchy chorus, but also sends a message to listeners - which is what Awaken the Empire are all about. Damien Lawson has spoken about how this record is more of a movement, and product of emotional and physical fight, which arguably has a positive effect on the audience, giving them music they can connect to, much like other brilliant and successful bands including The Color Morale and Beartooth. It is hard these days to decipher which genre an album or a band fits into, so if I was to suggest anything it would be, if you’re a fan of 30 Seconds to Mars, Linkin Park’s more recent albums such as The Hunting Party or even some of Black Veil Brides then you should really give Awaken the Empire a listen. Some of the other songs on the album, including ‘Cruel World’ start you off with a slow start and build up to a heavier middle and end and again, bring catchy meaningful lyrics. Arguably the beginning of the album is the strongest and the middle fills the album out but can be a little repetitive. However, most of the songs really stand out and demonstrate Awaken the Empires full potential. ‘Cruel World’, ‘Holding My Breath’, ‘I’m Not Invisible’ and obviously ‘Insomniacs Unite’ are definitely the songs to look out for on Aurora. That’s if you’re like me and are looking for heavy alternative rock that gets you off your feet as well as brings real meaning and emotion. Some of the songs start us off with a piano sound, or electronic score which is quickly turned into heavy guitar riffs which fade out slightly but very quickly to

bring in the vocals, such as ‘Ashes’ and ‘Cross My Heart’. Whilst the middle of the songs are energetic and undeniably will create many mosh pits. However, I can’t help but feel some of the songs may be a little rushed, lacking any real build up. ‘A Tribute to Rome’ is a slower one on the album, starting off very quiet and focuses more on the vocals, with an eerie, dream-like sound to it. This song definitely shows off Lawson’s voice but is also intriguing as it stands out from the others and is hard to compare to any other band. ‘For Never For Always’ finishes the album, which came as a surprise to me as I found it was one of the weakest on the album. The guitar, bass and drums take over this song and sound a little mashed together, making it hard to distinguish and remember. However this does not take away the fact it again has fantastic and meaningful lyrics like the others. Overall I felt a little mixed about this album, with some songs really standing out, filled with memorable and catchy lyrics compared to others that sounded a little

rushed. However, Awaken the Empire are defiantly going in a positive direction with this album and I recommend you give them a listen.

Candyman Records No longer is it enough to just hammer at the bottom string, far too much of that has been done already. Things did get better when seven and eight string guitars became more prevalent; however, again, this has now been done to death. Likewise, the (now) classic formula of heavy, palm muted chugging and brutal screaming vocals is becoming more and more bland. Bands now, if they are not breaking new musical ground, need to, at the very least, start bringing something more polished, more considered and more refined; Wearing Scars, although not pioneers in what they are doing, they have brought us exactly that something polished, considered and refined. Based in Northampton, Wearing Scars are an amalgamation of former members of Sacred Mother Tongue (Andy James, Lee Newall & Craig Daws) and Chris Clancy formerly of Mutiny Within. Bringing us their debut album, A Thousand Words, their experience is immediately apparent from the first track, ‘Become Numb’. The fact that we were able to listen to the tracks in uncompressed .WAV format is a treat; the clarity of sound is fantastic and really helps to separate the elements within the songs. ‘Become Numb’ is a fantastic opener, that does not initially give away too much but kicks in with an understated and well paced riff which is complemented by the drums. when Chris’s vocals kick in, it becomes clear that they have created something that has evolved from their previous experiences. The tracks that ensue are well crafted with clear and melodic vocals; the pace and sound affording a versatility that makes this album a good all rounder - it is not one of those albums that you have to be in a specific mood for.

We are offered something a bit more edgy with ‘A Last Goodbye’, which steps up the pace a touch but still very much maintains the hard rock vibe maintained throughout the album. Title tack, ‘Wearing Scars’, lends a more melodic and melancholy feel before uplifting into something more triumphant and empowering in its sound. Overall, the album is not treading new ground, but it is a well composed and well produced album that certainly stands out in terms of its quality. The vocal delivery is very accessible and will undoubtedly have fans singing along during live performances; to top this off, it is backed by some great hooks and heavy guitar riffs that provide a well balanced musical platform for the vocals.

Advertise in our next issue! Head to: http://ramzine.co.uk/about-ramzine/advertising for more info. 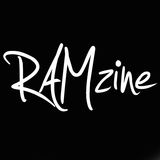 5-page Download Festival Review! Interview with We Came As Romans! Preview of Vans Warped Tour UK, & lot's of reviews from the latest unsign...

5-page Download Festival Review! Interview with We Came As Romans! Preview of Vans Warped Tour UK, & lot's of reviews from the latest unsign...