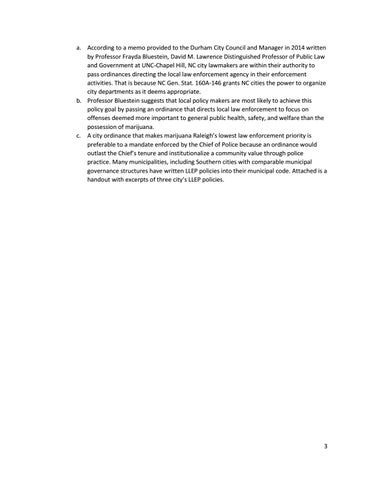 a. According to a memo provided to the Durham City Council and Manager in 2014 written by Professor Frayda Bluestein, David M. Lawrence Distinguished Professor of Public Law and Government at UNC-Chapel Hill, NC city lawmakers are within their authority to pass ordinances directing the local law enforcement agency in their enforcement activities. That is because NC Gen. Stat. 160A-146 grants NC cities the power to organize city departments as it deems appropriate. b. Professor Bluestein suggests that local policy makers are most likely to achieve this policy goal by passing an ordinance that directs local law enforcement to focus on offenses deemed more important to general public health, safety, and welfare than the possession of marijuana. c. A city ordinance that makes marijuana Raleighâ&#x20AC;&#x2122;s lowest law enforcement priority is preferable to a mandate enforced by the Chief of Police because an ordinance would outlast the Chiefâ&#x20AC;&#x2122;s tenure and institutionalize a community value through police practice. Many municipalities, including Southern cities with comparable municipal governance structures have written LLEP policies into their municipal code. Attached is a handout with excerpts of three cityâ&#x20AC;&#x2122;s LLEP policies. 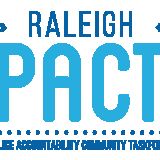