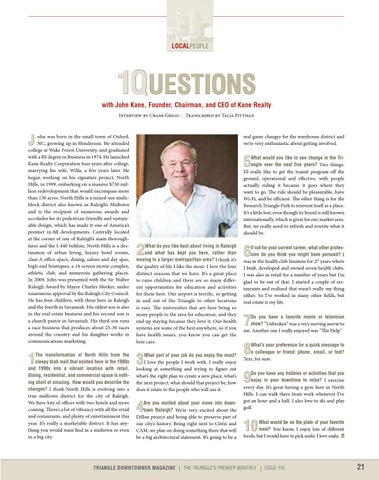 ohn was born in the small town of Oxford, NC, growing up in Henderson. He attended college at Wake Forest University, and graduated with a BS degree in Business in 1974. He launched Kane Realty Corporation four years after college, marrying his wife, Willa, a few years later. He began working on his signature project, North Hills, in 1999, embarking on a massive $750 million redevelopment that would encompass more than 130 acres. North Hills is a mixed-use multiblock district also known as Raleigh’s Midtown and is the recipient of numerous awards and accolades for its pedestrian-friendly and sustainable design, which has made it one of America’s premier in-fill developments. Centrally located at the corner of one of Raleigh’s main thoroughfares and the I-440 beltline, North Hills is a destination of urban living, luxury hotel rooms, class A office space, dining, salons and day spas, high-end boutiques, a 14-screen movie complex, athletic club, and numerous gathering places. In 2009, John was presented with the Sir Walter Raleigh Award by Mayor Charles Meeker, under unanimous approval by the Raleigh City Council. He has four children, with three here in Raleigh and the fourth in Savannah. His oldest son is also in the real estate business and his second son is a church pastor in Savannah. His third son runs a race business that produces about 25-30 races around the country and his daughter works in communications marketing.

The transformation of North Hills from the sleepy drab mall that existed here in the 1980s and 1990s into a vibrant location with retail, dining, residential, and commercial space is nothing short of amazing. How would you describe the changes? I think North Hills is evolving into a

true midtown district for the city of Raleigh. We have lots of offices with two hotels and more coming. There’s a lot of vibrancy with all the retail and restaurants, and plenty of entertainment this year. It’s really a marketable district. It has anything you would want find in a midtown or even in a big city.

real game changer for the warehouse district and we’re very enthusiastic about getting involved.

What would you like to see change in the Triangle over the next five years? Two things.

If not for your current career, what other profession do you think you might have pursued? I

I’d really like to get the transit program off the ground, operational and effective, with people actually riding it because it goes where they want to go. The ride should be pleasurable, have Wi-Fi, and be efficient. The other thing is for the Research Triangle Park to reinvent itself as a place. It’s a little lost, even though its brand is still known internationally, which is great for our market area. But, we really need to refresh and rewrite what it should be.

What do you like best about living in Raleigh and what has kept you here, rather than moving to a larger metropolitan area? I think it’s

the quality of life I like the most. I love the four distinct seasons that we have. It’s a great place to raise children and there are so many different opportunities for education and activities for them here. Our airport is terrific, so getting in and out of the Triangle to other locations is easy. The universities that are here bring so many people to the area for education, and they end up staying because they love it. Our health systems are some of the best anywhere, so if you have health issues, you know you can get the best care.

What part of your job do you enjoy the most?

I love the people I work with. I really enjoy looking at something and trying to figure out what’s the right plan to create a new place, what’s the next project, what should that project be, how does it relate to the people who will use it.

Dillon project and being able to preserve part of our city’s history. Being right next to Citrix and CAM, we plan on doing something there that will be a big architectural statement. It’s going to be a

was in the health club business for 27 years where I built, developed and owned seven health clubs. I was also in retail for a number of years but I’m glad to be out of that. I started a couple of restaurants and realized that wasn’t really my thing either. So I’ve worked in many other fields, but real estate is my life.

Do you have a favorite movie or television show? “Unbroken” was a very moving movie to

me. Another one I really enjoyed was “The Help.”

What’s your preference for a quick message to a colleague or friend: phone, email, or text?

Do you have any hobbies or activities that you enjoy in your downtime to relax? I exercise

every day. It’s great having a gym here in North Hills. I can walk there from work whenever I’ve got an hour and a half. I also love to ski and play golf.

What would be on the plate of your favorite meal? You know, I enjoy lots of different

foods, but I would have to pick sushi. I love sushi. 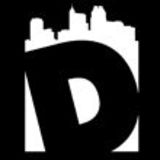