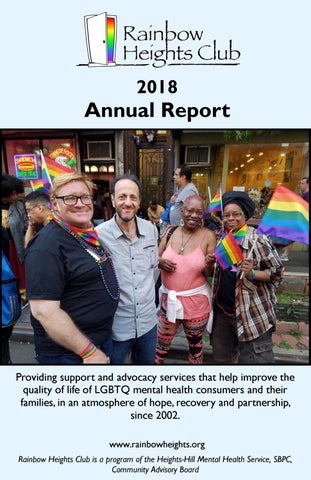 Providing support and advocacy services that help improve the quality of life of LGBTQ mental health consumers and their families, in an atmosphere of hope, recovery and partnership, since 2002. www.rainbowheights.org Rainbow Heights Club is a program of the Heights-Hill Mental Health Service, SBPC, Community Advisory Board

Peer Spotlight: Randy Killings & Mark Pelipiche Partners in Life & in Recovery Randy Killings, Director of Peer Services at RHC, has seen many challenges in his life but his dedication to recovery & community service has allowed him to give back to others in a way that also supports his mental health. In 2009 Randy enrolled in the Howie the Harp peer training which ultimately brought him to RHC as a Peer Specialist Intern. .

It is here that Randy found his calling-to help others with their recovery as he continued his own. After completing an internship at RHC, Randy was offered a job as part-time peer specialist. In less than a year, he became a full-time staff member. Since then Randy has been promoted to Member Services Coordinator and then to the Director of Peer Services, where he provides supervision to

Reflecting on this full circle moment Randy said, “My goal is to continue supporting people in their recovery and when I can, become a mentor for the next generation of young people who are passionate about working with adults with serious mental illness”. In recognition of his work City Council Majority Leader Laurie Cumbo on behalf of the Council, awarded Randy a citation for his dedication to community service.

Randy and his life partner, Mark Pelipiche have been partners, for 13 years supporting each other in their recovery. Mark’s mental health concerns began after his involvement in the criminal justice system but upon release in 2009, Mark sought a community to support his recovery. Shortly thereafter, Mark began to see a therapist regularly and became a member of RHC, where with the support of Randy and the RHC community, he found stability for the first time in his life. In 2013, Mark began regularly volunteering at RHC and began to oversee the food service program, grocery shopping, cooking, cleaning, and providing tours for prospective members. Mark found that along with the supportive community of peers at RHC, staying productive and working was greatly beneficial to his recovery. Mark has since taken the skills he learned volunteering at RHC to secure full time employment in the food industry. “At first I was nervous and scared.. But I gave myself a chance and I feel very proud of myself”, Mark says. “I would tell others like me: don’t be scared and to go for your goals! Be the person you want to be. Speak up because you have a voice!” Now, Mark looks forward to going to work and takes pride in keeping his customers happy. “Working has become part of my recovery and mental health. I am grateful to RHC because they helped me along my journey to achieve my goals.”

Dear friends, colleagues and supporters, We are delighted to present you with our 2018 Annual Report! It’s our chance to share pictures and stories of people coming together at Rainbow Heights Club to support each other as they grow in recovery, from struggling to surviving to thriving.

With your support, we continue to serve a diverse membership, including 69% people of color. Our transgender and gender nonconforming members find a place of safety and acceptance where they can thrive. This year, with the support of the New York City Council, we’ve expanded our services, hired new staff, doubled the number of Peer Specialist internships at the club, and expanded our Equality Care trainings, which help mental health providers across NYC work more effectively with LGBTQ people who are living with mental illness. Every day, we’re grateful to be part of an organization where everyone can find a safe space for recovery, regardless of their sexual orientation or gender identity.

Thank you so much for helping to make it possible! Sincerely,

According to our April 2018 Consumer Survey... 92% of members were free of hospital admissions for psychiatric reasons in the past year. (The average cost of a year of inpatient treatment is around $301,361.90.) 88% were free of hospital admissions for medical reasons 92% of members who expressed an opinion felt that being a member of Rainbow Heights Club helped them remain free of psychiatric hospitalization 85% report fewer psychiatric symptoms

In 2018, RHC staff conducted 764 support groups and 3,122 1-on-1 peer support sessions Since joining Rainbow Heights Club*â&#x20AC;Ś 91% of members say they are more consistent with their mental health treatment 96% of members feel they have more social support

This year RHC and E/Quality Care provided over 30 trainings across NYC to a variety of behavioral health agencies. Through this outreach we trained nearly 750 providers on how to provide LGBTQ competent care and create affirming behavioral health environments for LGBTQ consumers.

Member Spotlight: Rafael Diaz While Rafael Diaz has only been a member at Rainbow Heights Club for a little over a year now, he has been volunteering here ever since 2012. Rafael was forced to take a break from volunteering when he was diagnosed with throat cancer. After fighting his cancer twice, Rafael is now happy to say he is completely cancer-free. Now that he’s returned, he cooks and serves two meals a week for Rainbow Heights members as a part of the free evening meal program. “I like giving back to my community and enjoying the joy members get from eating my meals. It makes me feel that I’ve done something worth while– to make even just one person happy.” He continues to say, “RHC is important because a lot of people don’t have a safe haven or a place to express themselves. There is nothing that makes someone happier than feeling free.”

Members’ Evening Meal Program 9,837 free meals served in 2018 98% of members eat dinner at the club 91% have helped to prepare dinner Over 67% state they are eating healthier than they did before joining the Club

“Eating dinner together with other members makes me feel good. I feel a sense of community. When I gather with the fellow LGBTQ members for dinner at Rainbow Heights Club we laugh and converse and it feels like a family. I’m Type-2 Diabetic and they always provide a healthy meal and salad which helps keep me well. And the food is delicious!” -Keith

“What I like about Rainbow Heights is the unity, the feeling of safety– emotionally, physically, and mentally. There are always lots of people to talk to, both peers and other members.” -Corondi

“People care about each other here. There is a lot of support and resources. Having the support of Rainbow Heights makes me feel like I belong somewhere. It makes me feel loved.” -Brandi

“I love karaoke and the all the other groups! That’s what I like about RHC. The groups help me because I get to talk about what’s on my mind and also have fun in a supporting environment.” -Jose

Home & Community Based Services (HCBS) Over the past six months HHMHSCAB (Rainbow Heights Club) has been able to further develop their Behavioral Health Home & Community Based Services (HCBS) program to expand its reach to more than double the amount of enrolled members in previous months. We have been able to increase the quality of the members’ experience and have supported members’ recovery from traumatic experiences including grieving for lost loved ones, physical & emotional abuse, substance use disorders, & homelessness. The staff has also enhanced the independent living skills of enrolled members by helping develop resumes, provided employment support, guided members who wanted to further their education, & increased the use of adaptive coping behavior to better manage symptoms. We have also grown to provide supportive care in the homes of our members.

“HCBS Services give me the opportunity to go to places that are relevant to my recovery and get support. One of them is the World Trade Center. When I’m able to get support in the community, it helps me manage my anxiety and develop more self confidence so that I can lead a more productive life.” -Mia

RHC Peer Specialist Intern Program Most direct consumer services at Rainbow Heights Club are provided by our Peer Specialists, who themselves are mental health consumers trained to facilitate support groups and provide short, non clinical 1 on 1 interventions. To become a Peer Specialist, candidates receive specialized training and serve a 6 month internship here at the club. We’re grateful to NYC Council Speaker Corey Johnson and Chairman of the Finance Committee, Daniel Dromm, for providing the funding for stipends for our PS Interns.

“I want to be that person that can link people to the support they need. I know how helpful it would have been if I had someone like that when I needed help.” -Aida

“I wanted to do something meaningful and purposeful by sharing my own personal struggles with mental health.” -Bryce

“The main thing that lead me to want to become a Peer Specialist was the fact that I had people who barely knew me that helped me in my time of need. I want to pay it forward and give back to others.” -Sean

A donation to Rainbow Heights Club is a cost effective investment in the lives of LGBTQ New Yorkers living with serious mental illness. Operating as a drop-in center, with an average cost per program visit of $35.50 per person, our members can attend social support groups, receive 1 on 1 support, participate in outside activities, obtain carfare assistance, and enjoy a nutritious hot meal, all free of charge. Considering that a year of in-patient psychiatric hospitalization costs Medicaid over $300,000, and our services reduce psychiatric hospitalizations significantly, our programming saves the taxpayers of New York hundreds of thousands, if not millions, of dollars yearly. Our programs have demonstrated that they assist members in remaining in outpatient care and adherent to their medication regimes. Most importantly, our members are active, engaged participants in their recovery and in their community. 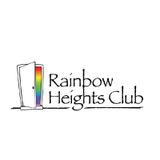