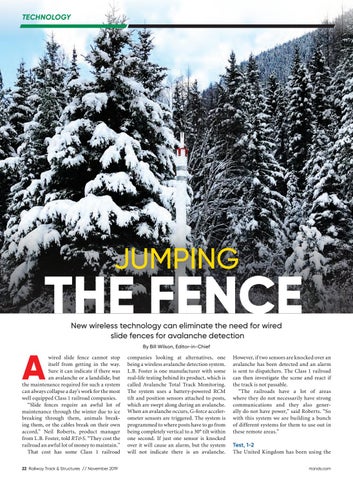 wired slide fence cannot stop itself from getting in the way. Sure it can indicate if there was an avalanche or a landslide, but the maintenance required for such a system can always collapse a day’s work for the most well equipped Class 1 railroad companies. “Slide fences require an awful lot of maintenance through the winter due to ice breaking through them, animals breaking them, or the cables break on their own accord,” Neil Roberts, product manager from L.B. Foster, told RT&amp;S. “They cost the railroad an awful lot of money to maintain.” That cost has some Class 1 railroad 22 Railway Track &amp; Structures // November 2019

companies looking at alternatives, one being a wireless avalanche detection system. L.B. Foster is one manufacturer with some real-life testing behind its product, which is called Avalanche Total Track Monitoring. The system uses a battery-powered RCM tilt and position sensors attached to posts, which are swept along during an avalanche. When an avalanche occurs, G-force accelerometer sensors are triggered. The system is programmed to where posts have to go from being completely vertical to a 30° tilt within one second. If just one sensor is knocked over it will cause an alarm, but the system will not indicate there is an avalanche.

However, if two sensors are knocked over an avalanche has been detected and an alarm is sent to dispatchers. The Class 1 railroad can then investigate the scene and react if the track is not passable. “The railroads have a lot of areas where they do not necessarily have strong communications and they also generally do not have power,” said Roberts. “So with this system we are building a bunch of different systems for them to use out in these remote areas.” Test, 1-2 The United Kingdom has been using the rtands.com

The RT&S November issue contains stories on the bridge repair done on a rail bridge over the Colorado River that caught on fire, a rundown on some of the more important yard and terminal projects in North America, a bridge construction project in New York as well as a product/service section on track inspection.