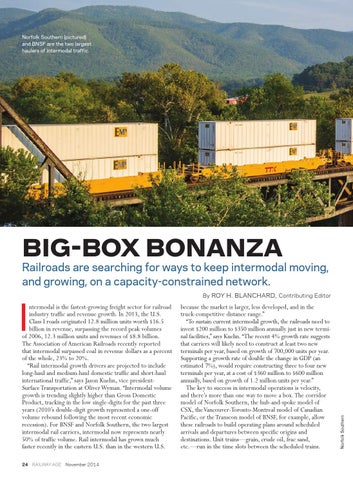 Norfolk Southern (pictured) and BNSF are the two largest haulers of intermodal traffic.

Railroads are searching for ways to keep intermodal moving, and growing, on a capacity-constrained network.

because the market is larger, less developed, and in the truck-competitive distance range.” “To sustain current intermodal growth, the railroads need to invest $200 million to $350 million annually just in new terminal facilities,” says Kuehn. “The recent 4% growth rate suggests that carriers will likely need to construct at least two new terminals per year, based on growth of 700,000 units per year. Supporting a growth rate of double the change in GDP (an estimated 7%), would require constructing three to four new terminals per year, at a cost of $360 million to $600 million annually, based on growth of 1.2 million units per year.” The key to success in intermodal operations is velocity, and there’s more than one way to move a box. The corridor model of Norfolk Southern, the hub-and-spoke model of CSX, the Vancouver-Toronto-Montreal model of Canadian Pacific, or the Transcon model of BNSF, for example, allow these railroads to build operating plans around scheduled arrivals and departures between specific origins and destinations. Unit trains—grain, crude oil, frac sand, etc.—run in the time slots between the scheduled trains.

ntermodal is the fastest-growing freight sector for railroad industry traffic and revenue growth. In 2013, the U.S. Class I roads originated 12.8 million units worth $16.5 billion in revenue, surpassing the record peak volumes of 2006, 12.3 million units and revenues of $8.8 billion. The Association of American Railroads recently reported that intermodal surpassed coal in revenue dollars as a percent of the whole, 23% to 20%. “Rail intermodal growth drivers are projected to include long-haul and medium-haul domestic traffic and short-haul international traffic,” says Jason Kuehn, vice presidentSurface Transportation at Oliver Wyman. “Intermodal volume growth is trending slightly higher than Gross Domestic Product, tracking in the low single-digits for the past three years (2010’s double-digit growth represented a one-off volume rebound following the most recent economic recession). For BNSF and Norfolk Southern, the two largest intermodal rail carriers, intermodal now represents nearly 50% of traffic volume. Rail intermodal has grown much faster recently in the eastern U.S. than in the western U.S. 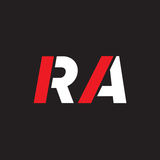