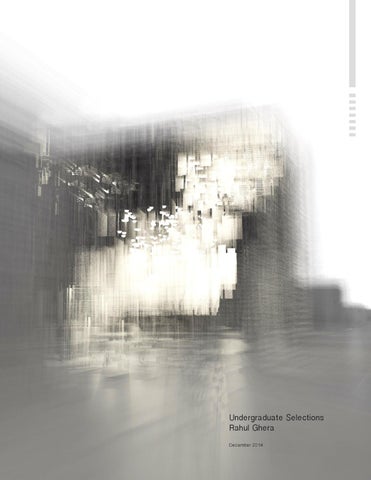 In this semester we worked with an assigned material, concrete. Our installation spanned thirty feet across our studio and stood ten feet high, and provided an enclosure for our group of eight students. Through numerous efforts of trial and error, we were able to design an aggregate mixture of concrete bringing the overall weight (per bay) down by 35%. Ghera

SPRING 2012 We designed a system that would be able to resist the tension of both concrete members leaning on each other by casting a plywood joint within the concrete. Pouring the first mixture resulted in a total weight of 536 lbs/ beam. After substituting rocks found in the concrete mixture with ground blue insulation foam and fiberglass, we achieved a final weight of 360 lbs/beam. Top: preliminary study models, Middle: concrete casts being poured, Bottom left: joint connection, Bottom right: trowel designed to smooth out casts.

Wood member cast in concrete. Once both casts were aligned, bolts secured the connection point.

SPRING 2012 This was a group project. I assisted with the mixing and pouring of every beam, along with the final assembly. Graphics were also synchronized by me.

This studio was sited in the west side of Buffalo, which has a large pop of refugees and immigrants. My approach was to design a space where community development, fresh produce sales, and recreational events would take place, facilitating a social mix of the neighborhood and maintaining a local urban aspect from which all neighboring residents could participate. Ghera

Original section model taken from precedent and manipulated in studies (above)

The design emerged by applying similar manipulation techniques as done to the precedent model. This process surfaced methods to divide space appropriately based on program.

Exploded Perspective This shows the division of program. Towards the left is the market, and to the right is the theatre. Both programs are wrapped by a concrete skin which serves as an outdoor seating/performance space.

This elective course tested my ability to translate extreme phenomena through architectural drawing. After examining the Eames House Case Study No. 8, and studying the circumstances of a black hole, both thematic motifs were overlaid to create a conceptual montage. Ghera

This representation expresses the relationship between architectural design and structure under a gravitational lens.

In these floor plans it is clear to see how prioritizing public and private areas can dictate the overall composition. West: Public, Middle: Core, East: Private

This semester studied the process of inversion through a series of graphic collages and mixed media explorations. The project began with studying Mies van Der Roheâ&#x20AC;&#x2122;s Barcelona Pavilion. Inversion began by taking Miesâ&#x20AC;&#x2122; methodologies for space making and material usage then degrading its appearance, spatial qualities, and form. Ghera

SUMMER 2014 Through the process of collage I was able to combine methods of inversion and have them emerge as they were layered together.

SUMMER 2014 This zoomed render gives a sense of the materiality and circulation through the suspended curtains.

The horizontality of the pavilion disappears as towers rise, suspending mesh curtains expressing a tall, airy, and unstable structure.

SUMMER 2014 These images were taken in Barcelona during our final review. This studio pushed me to expand my graphic and spatial lens. The model was built in order to understand the overall composition of the layered curtains. Left: final review pin-up, Bottom: layered model hung from ceiling

Located in Allentown Buffalo, the facility augments the thriving arts community. This urban art colony includes apartments for residential fellowships of 1-3 months, together with studio spaces for both fellows and local artists. The south-facing living units, together with a rooftop bar and terrace for the artists who live and work in the building, are situated along Allen Street, while open plan flexible studio floors face the north. A triple-height entrance lobby on Allen Street leads to a ground level public cafe and a skylit atrium at the heart of the building, where a monumental stair leading to public galleries on the second floor also serves as an informal auditorium for performances and events. The atrium, dividing the living and studio zones, links the public spaces on the lower levels with private realm on upper floors. Open stairs crisscross the void, so that artists pass back and forth through the atrium as they move between their dwellings and workspaces. The site cast concrete building, like a daylight factory, has a robust industrial character. Panels of stainless steel mesh veil the north and south faces of the atrium, providing artists with privacy, while allowing views into the public realm. The west atrium wall flanking the vertical circulation core is a hydroponic green wall, which helps to filter air in the building. The Main Street facade of the studio block likewise has stainless steel mesh external sunshading, while on Allen Street, the more open residential facade is defined by an exposed site cast concrete wrapper and recessed glazing. Ghera

This detailed section emphasizes how the atrium divides the housing from the studio zone. This section includes performative properties and how the design incorporated them.

FALL 2014 This interior render shows the use of the main seating and gallery space during a First Friday in Buffalo.

View from my apartment Ghera 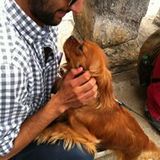