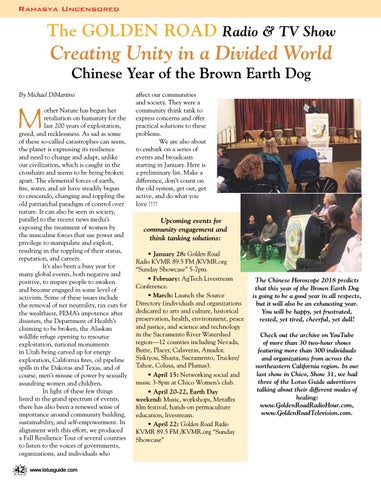 other Nature has begun her retaliation on humanity for the last 200 years of exploitation, greed, and recklessness. As sad as some of these so-called catastrophes can seem, the planet is expressing its resilience and need to change and adapt, unlike our civilization, which is caught in the crosshairs and seems to be being broken apart. The elemental forces of earth, fire, water, and air have steadily begun to crescendo, changing and toppling the old patriarchal paradigm of control over nature. It can also be seen in society, parallel to the recent news media’s exposing the treatment of women by the masculine forces that use power and privilege to manipulate and exploit, resulting in the toppling of their status, reputation, and careers. It’s also been a busy year for many global events, both negative and positive, to inspire people to awaken and become engaged in some level of activism. Some of these issues include the removal of net neutrality, tax cuts for the wealthiest, FEMA’s impotence after disasters, the Department of Health’s claiming to be broken, the Alaskan wildlife refuge opening to resource exploitation, national monuments in Utah being carved up for energy exploration, California fires, oil pipeline spills in the Dakotas and Texas, and of course, men’s misuse of power by sexually assaulting women and children. In light of these few things listed in the grand spectrum of events, there has also been a renewed sense of importance around community building, sustainability, and self-empowerment. In alignment with this effort, we produced a Fall Resilience Tour of several counties to listen to the voices of governments, organizations, and individuals who

affect our communities and society. They were a community think tank to express concerns and offer practical solutions to these problems. We are also about to embark on a series of events and broadcasts starting in January. Here is a preliminary list. Make a difference, don’t count on the old system, get out, get active, and do what you love !!!!

The Chinese Horoscope 2018 predicts that this year of the Brown Earth Dog is going to be a good year in all respects, but it will also be an exhausting year. You will be happy, yet frustrated, rested, yet tired, cheerful, yet dull! Check out the archive on YouTube of more than 30 two-hour shows featuring more than 300 individuals and organizations from across the northeastern California region. In our last show in Chico, Show 31, we had three of the Lotus Guide advertisers talking about their different modes of healing: www.GoldenRoadRadioHour.com, www.GoldenRoadTelevision.com. Everything from an interview with Joe Dispenza and becoming Supernatural to the dark side of A.I. and what it could mean for humans.

Everything from an interview with Joe Dispenza and becoming Supernatural to the dark side of A.I. and what it could mean for humans.