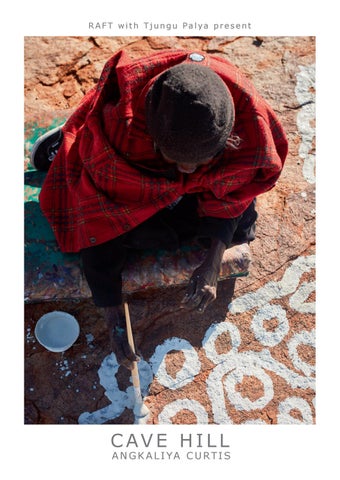 NGAYUKU MITAKU NGURANGKA (this is the countr y I have inherited from my husband) a wonderful place ca lled Cave Hill. Cave Hill is an impor tant site for the Seven Sisters dreaming stor y. When you come here you can see in the rock for mations the stor y of seven sisters as they ran from Wati Nyir u (the cheeky man). The sisters hid in the darkness of the big cave and the oldest sister used her wana (digging stick) to make a hole to escape through the

back of the cave, you can still see the scratching marks she made. Cave Hill ta tjukurla tjuta ngaranyi. There is a lot of water here too, many rock holes and connecting creeks and water courses. The abundance of water, food and tjurkupa makes Cave Hill a precious place. My husband Billynya and I travelled on a camel from the mission in Ernabella to this magical home. Angkaliya Cur tis

These 9 paintings were made over the course of a few short weeks at the end of last year. The majority of the works were made in a single sitting , which is unusual for Angkaliya.

For many years Angkaliya painted the animals of the desert, painstakingly rendered within fields of the delicate scratching of the ‘punu’ dotting stick. Angkaliya’s animals: the perentie, rabbit, donkey, goanna, (the description of some paintings note the inclusion of monkeys she saw at Adelaide zoo!) were widely admired, their anthropomorphised faces bringing humour to her powerful and unusual compositions.

For the past few years Angkaliya mined a vein of abstraction which has threaded itself through her practice since the early years. A recurring motif of roundels interlaced with expressive lines, often featuring her boldest palettes.

These epic canvases featured Angkaliyaâ&amp;#x20AC;&amp;#x2122;s master y of the brush, a tool which up until then she has only used in dabbing in the black silhouettes of her desert creatures. Mural scale paintings which embodied the creative scope of an elderly woman working well into her nineties.

This suite of works appear to be a synthesis of Angkaliyaâ&amp;#x20AC;&amp;#x2122;s most famous styles. Painted without inhibition they contain some of her most expressive handling of paint.

The inhabitants of this special ‘Cave Hill’ suite are occasionally depicted with the clarity of her early ‘Animal Tjuta’ style, but it appears that during the years where Angkaliya was focussing her attentions on more abstracted imager y, her animals, waiting meanwhile by the waterhole, had begun to morph into something stranger… Riley Davison