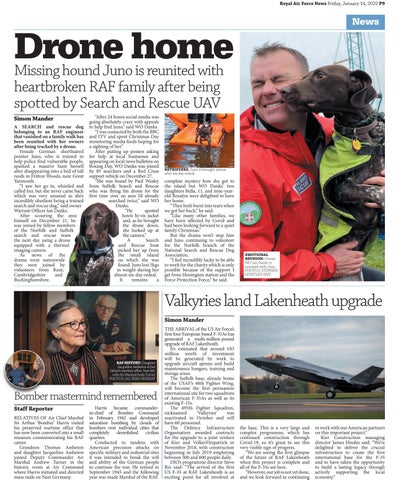 Drone home Missing hound Juno is reunited with heartbroken RAF family after being spotted by Search and Rescue UAV Simon Mander A SEARCH and rescue dog belonging to an RAF engineer that vanished on a family walk has been reunited with her owners after being tracked by a drone. Female German shorthaired pointer Juno, who is trained to help police find vulnerable people, sparked a massive hunt herself after disappearing into a bed of tall reeds in Fritton Woods, near Great Yarmouth. “I saw her go in, whistled and called her, but she never came back which was very unusual as she’s incredibly obedient being a trained search and rescue dog,” said owner Warrant Officer Ian Danks. After scouring the area himself on December 21, he was joined by fellow members of the Norfolk and Suffolk search and rescue team the next day using a drone equipped with a thermal imaging camera. As news of the drama went nationwide they were joined by volunteers from Kent, Cambridgeshire and Buckinghamshire.

“After 24 hours social media was going absolutely crazy with appeals to help find Juno,” said WO Danks. “I was contacted by both the BBC and ITV and spent Christmas Day monitoring media feeds hoping for a sighting of her.” After putting up posters asking for help at local businesses and appearing on local news bulletins on Boxing Day, WO Danks was joined by 85 searchers and a Red Cross support vehicle on December 27. “She was found by Paul Wesley from Suffolk Search and Rescue who was flying his drone for the first time over an area I’d already searched twice,” said WO Danks. “He spotted Juno’s hi-vis jacket and, as he brought the drone down, she looked up at the camera.” A Search and Rescue boat picked her up from the small island on which she was found. Juno lost 5kgs in weight during her almost six-day ordeal. It remains a

complete mystery how she got to the island but WO Danks’ two daughters Bella, 11, and nine-yearold Rosalyn were delighted to have her home. “They both burst into tears when we got her back,” he said. “Like many other families, we have been affected by Covid and had been looking forward to a quiet family Christmas.” But the drama won’t stop him and Juno continuing to volunteer for the Norfolk branch of the National Search and Rescue Dog Association. “I feel incredibly lucky to be able to work for the charity which is only possible because of the support I get from Honington station and the Force Protection Force,” he said.

Harris became commanderin-chief of Bomber Command in February 1942 and developed saturation bombing by clouds of bombers over individual cities that completely demolished civilian quarters. Conducted in tandem with American precision attacks on specific military and industrial sites it was intended to break the will and ability of the German people to continue the war. He retired in September 1945 and the following year was made Marshal of the RAF.

THE ARRIVAL of the US Air Force’s first four European based F-35As has generated a multi-million-pound upgrade of RAF Lakenheath. It’s estimated that around £83 million worth of investment will be generated by work to upgrade aircraft aprons and build maintenance hangars, training and storage areas. The Suffolk base, already home of the USAF’s 48th Fighter Wing, will become the first permanent international site for two squadrons of American F-35As as well as its existing F-15s. The 495th Fighter Squadron, nicknamed ‘Valkyries’ was reactivated in October and will have 60 personnel. The Defence Infrastructure Organisation awarded contracts for the upgrade to a joint venture of Kier and VolkerFitzpatrick in November 2018, with construction beginning in July 2019 employing between 500 and 600 people daily. DIO’s programme director Steve Rix said: “The arrival of the first US F-35 at RAF Lakenheath is an exciting point for all involved at

the base. This is a very large and complex programme, which has continued construction through Covid-19, so it’s great to see this very visible sign of progress. “We are seeing the first glimpse of the future of RAF Lakenheath when this project is complete and all of the F-35s are here. “However, our job is not yet done, and we look forward to continuing

to work with our American partners on this important project.” Kier Construction managing director James Hindes said: “We’re delighted to deliver the crucial infrastructure to create the first international base for the F-35 and to have taken the opportunity to build a lasting legacy through actively supporting the local economy.”