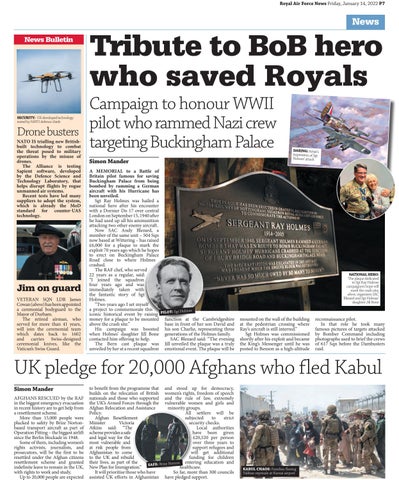 NATO IS trialling new Britishbuilt technology to combat the threat posed to military operations by the misuse of drones. The Alliance is testing Sapient software, developed by the Defence Science and Technology Laboratory, that helps disrupt flights by rogue unmanned air systems. Recent tests have led many suppliers to adopt the system, which is already the MoD standard for counter-UAS technology.

Jim on guard VETERAN SQN LDR James Cowan (above) has been appointed a ceremonial bodyguard to the Mayor of Durham. The retired airman, who served for more than 41 years, will join the ceremonial team which dates back to 1602 and carries Swiss-designed ceremonial knives, like the Vatican’s Swiss Guard.

Tribute to BoB hero who saved Royals Campaign to honour WWII pilot who rammed Nazi crew targeting Buckingham Palace Simon Mander A MEMORIAL to a Battle of Britain pilot famous for saving Buckingham Palace from being bombed by ramming a German aircraft with his Hurricane has been unveiled. Sgt Ray Holmes was hailed a national hero after his encounter with a Dornier Do 17 over central London on September 15, 1940 after he had used up all his ammunition attacking two other enemy aircraft. Now SAC Andy Blezard, a member of the same unit – 504 Sqn now based at Wittering – has raised £6,000 for a plaque to mark the exploit 70 years ago which he hopes to erect on Buckingham Palace Road close to where Holmes crashed. The RAF chef, who served 22 years as a regular, said: “I joined the squadron four years ago and was immediately taken with the fantastic story of Sgt Holmes. “Two years ago I set myself a project to commemorate this iconic historical event by raising money for a plaque to be mounted above the crash site.” His campaign was boosted when Holmes’ daughter Jill Bone contacted him offering to help. The Bern cast plaque was unveiled by her at a recent squadron

function at the Cambridgeshire base in front of her son David and his son Charlie, representing three generations of the Holmes family. SAC Blezard said: “The evening Jill unveiled the plaque was a truly emotional event. The plaque will be

mounted on the wall of the building at the pedestrian crossing where Ray’s aircraft is still interred.” Sgt Holmes was commissioned shortly after his exploit and became the King’s Messenger until he was posted to Benson as a high-altitude

reconnaissance pilot. In that role he took many famous pictures of targets attacked by Bomber Command including photographs used to brief the crews of 617 Sqn before the Dambusters raid.

UK pledge for 20,000 Afghans who fled Kabul Simon Mander AFGHANS RESCUED by the RAF in the biggest emergency evacuation in recent history are to get help from a resettlement scheme. More than 15,000 people were plucked to safety by Brize Nortonbased transport aircraft as part of Operation Pitting – the biggest airlift since the Berlin blockade in 1948. Some of them, including women’s rights activists, journalists, and prosecutors, will be the first to be resettled under the Afghan citizens resettlement scheme and granted indefinite leave to remain in the UK, with rights to work and study. Up to 20,000 people are expected

to benefit from the programme that and stood up for democracy, builds on the relocation of British women’s rights, freedom of speech nationals and those who supported and the rule of law, extremely the UK’s Armed Forces through the vulnerable women and girls and Afghan Relocation and Assistance minority groups. Policy. All settlers will be Afghan Resettlement subjected to strict Minister Victoria security checks. Atkins said: “The Local authorities scheme provides a safe have been given and legal way for the £20,520 per person most vulnerable and over three years to at risk people from support refugees and Afghanistan to come will get additional to the UK and rebuild funding for children their lives, as part of the n entering education and SAFE: Brize Norto New Plan for Immigration.” healthcare. It will prioritise those who have So far, more than 300 councils assisted UK efforts in Afghanistan have pledged support.