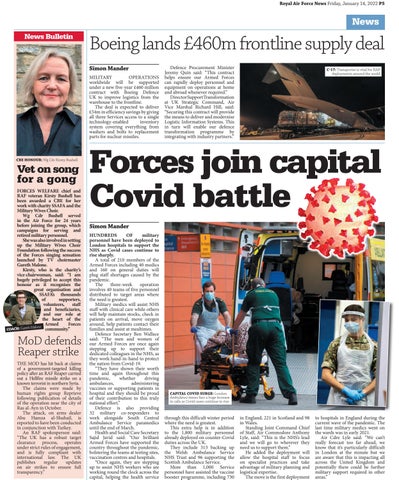 Boeing lands £460m frontline supply deal Simon Mander MILITARY OPERATIONS worldwide will be supported under a new five-year £460 million contract with Boeing Defence UK to improve logistics from the warehouse to the frontline. The deal is expected to deliver £54m in efficiency savings by giving all three Services access to a single technology-enabled inventory system covering everything from washers and bolts to replacement parts for nuclear missiles.

Vet on song for a gong

FORCES WELFARE chief and RAF veteran Kirsty Bushell has been awarded a CBE for her work with charity SSAFA and the Military Wives Choir. Wg Cdr Bushell served in the Air Force for 24 years before joining the group, which campaigns for serving and retired military personnel. She was also involved in setting up the Military Wives Choir Foundation following the success of the Forces singing sensation launched by TV choirmaster Gareth Malone. Kirsty, who is the charity’s vice-chairwoman, said: “I am hugely privileged to accept this honour as it recognises the great organisation and SSAFA’s thousands of supporters, volunteers, staff and beneficiaries, and our role at the heart of the Armed Forces Malone community.” COACH: Gareth

MoD defends Reaper strike THE MOD has hit back at claims of a government-targeted killing policy after an RAF Reaper carried out a Hellfire missile strike on a known terrorist in northern Syria. The claims were made by human rights group Reprieve following publication of details of the operation near the city of Ras al-Ayn in October. The attack, on arms dealer Abu Hamza al-Shuhail, is reported to have been conducted in conjunction with Turkey. An RAF spokesperson said: “The UK has a robust target clearance process, operates under strict rules of engagement, and is fully compliant with international law. The UK publishes regular updates on air strikes to ensure full transparency.”

C-17: Transporter is vital for RAF deployments around the world

Forces join capital Covid battle Simon Mander HUNDREDS OF military personnel have been deployed to London hospitals to support the NHS as Covid cases continue to rise sharply. A total of 210 members of the Armed Forces including 40 medics and 160 on general duties will plug staff shortages caused by the pandemic. The three-week operation involves 40 teams of five personnel distributed to target areas where the need is greatest. Military medics will assist NHS staff with clinical care while others will help maintain stocks, check in patients on arrival, move oxygen around, help patients contact their families and assist at mealtimes. Defence Secretary Ben Wallace said: “The men and women of our Armed Forces are once again stepping up to support their dedicated colleagues in the NHS, as they work hand-in-hand to protect the nation from Covid-19. “They have shown their worth time and again throughout this pandemic, whether driving ambulances, administering vaccines or supporting patients in hospital and they should be proud of their contribution to this truly national effort.” Defence is also providing 32 military co-responders to work alongside South Central Ambulance Service paramedics until the end of March. Health and Social Care Secretary Sajid Javid said: “Our brilliant Armed Forces have supported the country throughout the pandemic, bolstering the teams at testing sites, vaccination centres and hospitals. “Once again, they are stepping up to assist NHS workers who are working round the clock across the capital, helping the health service

through this difficult winter period where the need is greatest. This extra help is in addition to the 1,800 military personnel already deployed on counter-Covid duties across the UK. They include 313 backing up the Welsh Ambulance Service NHS Trust and 96 supporting the Scottish Ambulance Service. More than 1,000 Service personnel have assisted the vaccine booster programme, including 730

in England, 221 in Scotland and 98 in Wales. Standing Joint Command Chief of Staff, Air Commodore Anthony Lyle, said: “This is the NHS’s lead and we will go to wherever they need us to support them.” He added the deployment will allow the hospital staff to focus on specialist practices and take advantage of military planning and logistical expertise. The move is the first deployment

to hospitals in England during the current wave of the pandemic. The last time military medics went on the wards was in early 2021. Air Cdre Lyle said: “We can’t really forecast too far ahead, we know that it’s particularly difficult in London at the minute but we are aware that this is impacting all across the United Kingdom and potentially there could be further military support required in other areas.”