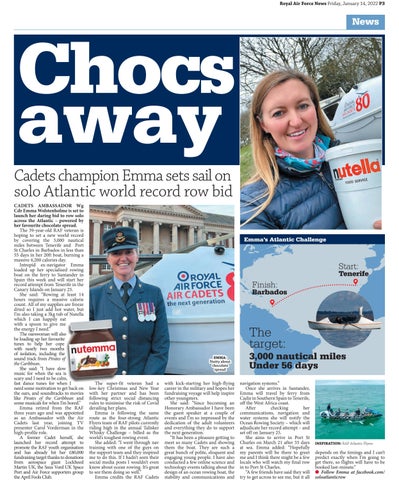 Chocs away Cadets champion Emma sets sail on solo Atlantic world record row bid CADETS AMBASSADOR Wg Cdr Emma Wolstenholme is set to launch her daring bid to row solo across the Atlantic – powered by her favourite chocolate spread. The 39-year-old RAF veteran is hoping to set a new world record by covering the 3,000 nautical miles between Tenerife and Port St Charles in Barbados in less than 55 days in her 20ft boat, burning a massive 4,200 calories day. Intrepid ex-navigator Emma loaded up her specialised rowing boat on the ferry to Santander in Spain this week and will start her record attempt from Tenerife in the Canary Islands on January 25. She said: “Rowing at least 14 hours requires a massive calorie count. All of my supplies are freeze dried so I just add hot water, but I’m also taking a 3kg tub of Nutella which I can happily eat with a spoon to give me the energy I need.” The oarswoman will also be loading up her favourite tunes to help her cope with nearly two months of isolation, including the sound track from Pirates of the Caribbean. She said: “I have slow music for when the sea is scary and I need to be calm, fast dance tunes for when I need some motivation to get back on the oars, and soundtracks to movies like Pirates of the Caribbean and some musicals for when I’m bored.” Emma retired from the RAF three years ago and was appointed as an Ambassador with the Air Cadets last year, joining TV presenter Carol Vorderman in the high-profile role. A former Cadet herself, she launched her record attempt to promote the RAF youth organisation and has already hit her £80,000 fundraising target thanks to donations from aerospace giant Lockheed Martin UK, the Saxa Vord UK Space Port and Air Force supporters group the April Fools Club.

The super-fit veteran had a low-key Christmas and New Year with her partner and has been following strict social distancing rules to minimise the risk of Covid derailing her plans. Emma is following the same route as the four-strong Atlantic Flyers team of RAF pilots currently riding high in the annual Talisker Whisky Challenge – billed as the world’s toughest rowing event. She added: “I went through nav training with one of the guys on the support team and they inspired me to do this. If I hadn’t seen their social media posts I wouldn’t even know about ocean rowing. It’s great to see them doing so well.” Emma credits the RAF Cadets

with kick-starting her high-flying career in the military and hopes her fundraising voyage will help inspire other youngsters. She said: “Since becoming an Honorary Ambassador I have been the guest speaker at a couple of events and I’m so impressed by the dedication of the adult volunteers and everything they do to support the next generation. “It has been a pleasure getting to meet so many Cadets and showing them the boat. They are such a great bunch of polite, eloquent and engaging young people. I have also conducted a few online science and technology events talking about the design of an ocean rowing boat, the stability and communications and

3,000 nautical miles Under 56 days navigation systems.” Once she arrives in Santander, Emma will travel by ferry from Cadiz in Southern Spain to Tenerife, off the West Africa coast. After checking her communications, navigation and water systems she will notify the Ocean Rowing Society – which will adjudicate her record attempt – and set off on January 25. She aims to arrive in Port St Charles on March 21 after 55 days at sea. Emma added: “Hopefully my parents will be there to greet me and I think there might be a few locals who will watch my final row in to Port St Charles. “A few friends have said they will try to get across to see me, but it all

depends on the timings and I can’t predict exactly when I’m going to get there, so flights will have to be booked last-minute.” l Follow Emma at facebook.com/ soloatlanticrow