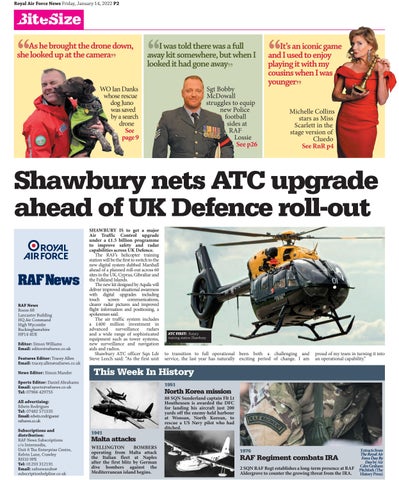 As he brought the drone down, she looked up at the camera”

I was told there was a full away kit somewhere, but when I looked it had gone away”

SHAWBURY IS to get a major Air Traffic Control upgrade under a £1.5 billion programme to improve safety and radar capabilities across UK Defence. The RAF’s helicopter training station will be the first to switch to the new digital system dubbed Marshall ahead of a planned roll-out across 60 sites in the UK, Cyprus, Gibraltar and the Falkland Islands. The new kit designed by Aquila will deliver improved situational awareness with digital upgrades including touch screen communications, clearer radar pictures and improved flight information and positioning, a spokesman said. The air traffic system includes a £400 million investment in advanced surveillance radars and a wide range of sophisticated equipment such as tower systems, new surveillance and navigation aids and radios. Shawbury ATC officer Sqn Ldr Steve Leech said: “As the first unit

to transition to full operational been both a challenging and service, the last year has naturally exciting period of change. I am

proud of my team in turning it into an operational capability.”

88 SQN Sunderland captain Flt Lt Houtheusen is awarded the DFC for landing his aircraft just 200 yards off the enemy-held harbour at Wonsan, North Korean, to rescue a US Navy pilot who had ditched.

Malta attacks WELLINGTON BOMBERS operating from Malta attack the Italian fleet at Naples after the first blitz by German dive bombers against the Mediterranean island begins.