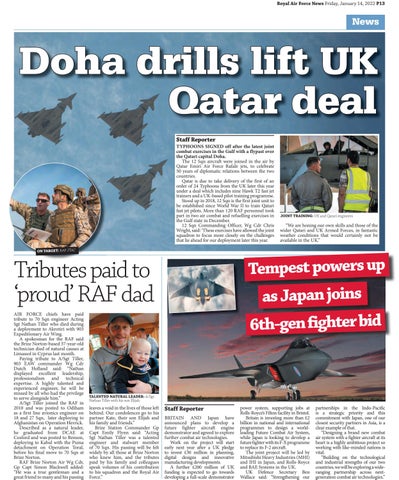 TYPHOONS SIGNED off after the latest joint combat exercises in the Gulf with a flypast over the Qatari capital Doha. The 12 Sqn aircraft were joined in the air by Qatar Emiri Air Force Rafale jets, to celebrate 50 years of diplomatic relations between the two countries. Qatar is due to take delivery of the first of an order of 24 Typhoons from the UK later this year under a deal which includes nine Hawk T2 fast jet trainers and a UK-based pilot training programme. Stood up in 2018, 12 Sqn is the first joint unit to be established since World War II to train Qatari fast jet pilots. More than 120 RAF personnel took part in two air combat and refuelling exercises in the Gulf state in December. 12 Sqn Commanding Officer, Wg Cdr Chris Wright, said: ‘These exercises have allowed the joint squadron to focus more closely on the challenges that lie ahead for our deployment later this year.

“We are honing our own skills and those of the wider Qatari and UK Armed Forces, in fantastic weather conditions that would certainly not be available in the UK.”

Tributes paid to ‘proud’ RAF dad AIR FORCE chiefs have paid tribute to 70 Sqn engineer Acting Sgt Nathan Tiller who died during a deployment to Akrotiri with 903 Expeditionary Air Wing. A spokesman for the RAF said the Brize Norton-based 37-year-old technician died of natural causes at Limassol in Cyprus last month. Paying tribute to A/Sgt Tiller, 903 EAW commander Wg Cdr Dutch Holland said: “Nathan displayed excellent leadership, professionalism and technical expertise. A highly talented and experienced engineer, he will be missed by all who had the privilege to serve alongside him.” A/Sgt Tiller joined the RAF in 2010 and was posted to Odiham as a first line avionics engineer on 18 and 27 Sqn, later deploying to Afghanistan on Operation Herrick. Described as a natural leader, he graduated from DCAE at Cosford and was posted to Benson, deploying to Kabul with the Puma detachment on Operation Toral, before his final move to 70 Sqn at Brize Norton. RAF Brize Norton Air Wg Cdr, Gp Capt Simon Blackwell added: “He was a true gentleman and a great friend to many and his passing

leaves a void in the lives of those left behind. Our condolences go to his partner Kate, their son Elijah and his family and friends.” Brize Station Commander Gp Capt Emily Flynn said: “Acting Sgt Nathan Tiller was a talented engineer and stalwart member of 70 Sqn. His passing will be felt widely by all those at Brize Norton who knew him, and the tributes paid by his family and colleagues speak volumes of his contribution to his squadron and the Royal Air Force.”

Staff Reporter BRITAIN AND Japan have announced plans to develop a future fighter aircraft engine demonstrator and agreed to explore further combat air technologies. Work on the project will start early next year after a UK pledge to invest £30 million in planning, digital designs and innovative manufacturing developments. A further £200 million of UK funding is expected to go towards developing a full-scale demonstrator

power system, supporting jobs at Rolls-Royce’s Filton facility in Bristol. Britain is investing more than £2 billion in national and international programmes to design a worldleading Future Combat Air System, while Japan is looking to develop a future fighter with its F-X programme to replace its F-2 aircraft. The joint project will be led by Mitsubishi Heavy Industries (MHI) and IHI in Japan, and Rolls-Royce and BAE Systems in the UK. UK Defence Secretary Ben Wallace said: “Strengthening our

partnerships in the Indo-Pacific is a strategic priority and this commitment with Japan, one of our closest security partners in Asia, is a clear example of that. “Designing a brand new combat air system with a fighter aircraft at its heart is a highly ambitious project so working with like-minded nations is vital. “Building on the technological and industrial strengths of our two countries, we will be exploring a wideranging partnership across nextgeneration combat air technologies.”