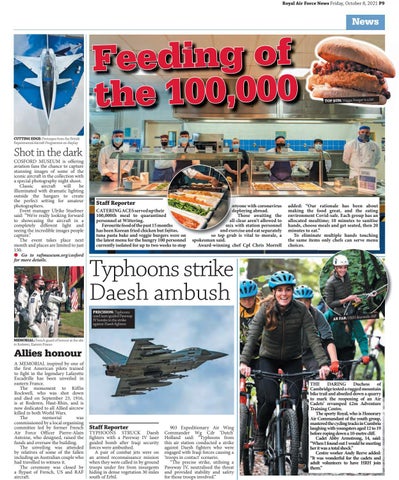 Shot in the dark

COSFORD MUSEUM is offering aviation fans the chance to capture stunning images of some of the iconic aircraft in the collection with a special photography night shoot. Classic aircraft will be illuminated with dramatic lighting outside the hangars to create the perfect setting for amateur photographers. Event manager Ulrike Stuebner said: “We’re really looking forward to showcasing the aircraft in a completely different light and seeing the incredible images people capture.” The event takes place next month and places are limited to just 150. Go to rafmuseum.org/cosford for more details.

Staff Reporter CATERING ACES served up their 100,000th meal to quarantined personnel at Wittering. Favourite food of the past 15 months has been Korean fried chicken but fajitas, tuna pasta bake and veggie burgers were on the latest menu for the hungry 100 personnel currently isolated for up to two weeks to stop

anyone with coronavirus deploying abroad. Those awaiting the all-clear aren’t allowed to mix with station personnel and exercise and eat separately so top grub is vital to morale, a spokesman said. Award-winning chef Cpl Chris Morrell

added: “Our rationale has been about making the food great, and the eating environment Covid-safe. Each group has an allocated mealtime; 10 minutes to sanitise hands, choose meals and get seated, then 20 minutes to eat.” To eliminate multiple hands touching the same items only chefs can serve menu choices.

MEMORIAL: French guard of honour at the site in Roderen, Eastern France

Allies honour A MEMORIAL inspired by one of the first American pilots trained to fight in the legendary Lafayette Escadrille has been unveiled in eastern France. The monument to Kiffin Rockwell, who was shot down and died on September 23, 1916, is at Roderen, Haut-Rhin, and is now dedicated to all Allied aircrew killed in both World Wars. The memorial was commissioned by a local organising committee led by former French Air Force Officer Pierre-Alain Antoine, who designed, raised the funds and oversaw the building. The unveiling was attended by relatives of some of the fallen including an Australian couple who had travelled to witness it. The ceremony was closed by a flypast of French, US and RAF aircraft.

TYPHOONS STRUCK Daesh fighters with a Paveway IV laser guided bomb after Iraqi security forces were ambushed. A pair of combat jets were on an armed reconnaissance mission when they were called in by ground troops under fire from insurgents hiding in dense vegetation 30 miles south of Erbil.

903 Expeditionary Air Wing Commander Wg Cdr ‘Dutch’ Holland said: “Typhoons from this air station conducted a strike against Daesh fighters who were engaged with Iraqi forces causing a ‘troops in contact’ scenario. “The precise strike, utilising a Paveway IV, neutralised the threat and provided stability and safety for those troops involved.”

THE DARING Duchess of Cambridge tested a rugged mountain bike trail and abseiled down a quarry to mark the reopening of an Air Cadets’ revamped £2m Adventure Training Centre. The sporty Royal, who is Honorary Air Commandant of the youth group, mastered the cycling tracks in Cumbria laughing with youngsters aged 12 to 19 before roping down a 10-metre cliff. Cadet Abby Armstrong, 14, said: “When I found out I would be meeting her it was a total shock.” Centre worker Andy Reeve added: “It was wonderful for the cadets and adult volunteers to have HRH join them.”