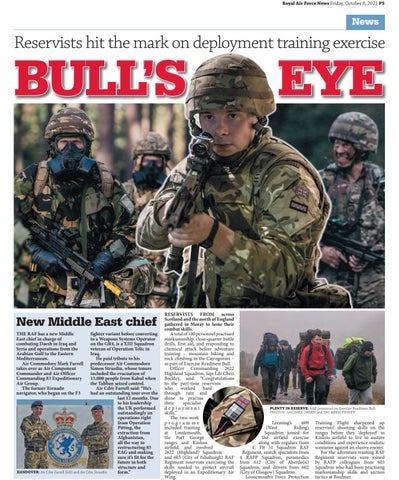 New Middle East chief THE RAF has a new Middle East chief in charge of combating Daesh in Iraq and Syria and operations from the Arabian Gulf to the Eastern Mediterranean. Air Commodore Mark Farrell takes over as Air Component Commander and Air Officer Commanding 83 Expeditionary Air Group. The former Tornado navigator, who began on the F3

fighter variant before converting to a Weapons Systems Operator on the GR4, is a XIII Squadron veteran of Operation Telic in Iraq. He paid tribute to his predecessor Air Commodore Simon Strasdin, whose tenure included the evacuation of 15,000 people from Kabul when the Taliban seized control. Air Cdre Farrell said: “He’s had an outstanding tour over the last 12 months. Due to his leadership the UK performed outstandingly on operations right from Operation Pitting, the extraction from Afghanistan, all the way to restructuring 83 EAG and making sure it’s fit for the future in both structure and HANDOVER: Air Cdre Farrell (left) and Air Cdre Strasdin form.”

RESERVISTS FROM across Scotland and the north of England gathered in Moray to hone their combat skills. A total of 100 personnel practised marksmanship, close-quarter battle drills, first aid, and responding to chemical attack before adventure training – mountain biking and rock climbing in the Cairngorms – as part of Exercise Readiness Bull. Officer Commanding 2622 Highland Squadron, Sqn Ldr Chris Beckley, said: “Congratulations to the part-time reservists who worked hard through rain and shine to practise their specialist deployment skills.” The two-week programme included training at Lossiemouth, the Fort George ranges and Kinloss airfield, and involved 2622 (Highland) Squadron and 603 (City of Edinburgh) RAF Regiment reservists exercising the skills needed to protect aircraft deployed in an Expeditionary Air Wing.

Training Flight sharpened up reservists’ shooting skills on the ranges before they ‘deployed’ to Kinloss airfield to live in austere conditions and experience realistic scenarios against an elusive enemy. For the adventure training RAF Regiment reservists were joined by RAFP colleagues from 603 Squadron who had been practising marksmanship skills and section tactics at Boulmer.