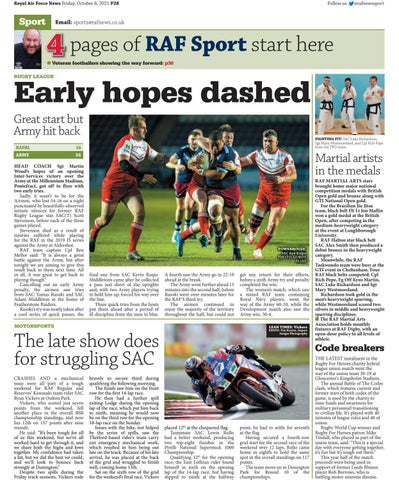 HEAD COACH Sgt Martin Wood’s hopes of an opening Inter-Services victory over the Army at the Millennium Stadium, Pontefract, got off to flyer with two early tries. EN GARDE: Action Sadly, it wasn’t to be for the from RAF Cosford Airmen, who lost 34-16 on a night PHOTO: punctuated by beautifully-observed CPL KRISTIAN minute silences for former RAF DAWSON Rugby League star SAC(T) Scott Stevenson, before each of the three games played. Stevenson died as a result of injuries suffered while playing for the RAF in the 2019 IS series against the Army at Aldershot. RAF team captain Cpl Ben Mellor said: “It is always a great battle against the Army, but after tonight we are aiming to give this result back to them next time. All in all, it was great to get back to playing though.” Cancelling out an early Army penalty, the airmen saw tries from SAC Tomas Rasoki and SAC Adam Middleton at the home of Featherstone Raiders. Rasoki’s try was neatly taken after a cool series of quick passes, the

Martial artists in the medals

final one from SAC Kevin Raqio. Middleton’s came after he collected a pass just short of the uprights and, with two Army players trying to hold him up, forced his way over the line. Three quick tries from the hosts put them ahead after a period of ill-discipline from the men in blue.

A fourth saw the Army go in 22-10 ahead at the break. The Army went further ahead 15 minutes into the second half, before Rasoki went over minutes later for the RAF’S third try. The airmen continued to enjoy the majority of the territory throughout the half, but could not

The late show does for struggling SAC CRASHES AND a mechanical issue were all part of a tough weekend for RAF Regular and Reserves’ Kawasaki team rider SAC Ryan Vickers at Oulton Park. Vickers, who scored just seven points from the weekend, fell another place in the overall BSB championship standings, and now lies 12th on 157 points after nine rounds. He said: “It’s been tough for all of us this weekend, but we’ve all worked hard to get through it, and we share both the highs and lows together. My confidence had taken a hit, but we did the best we could, and we’ll look to bounce back strongly at Donington.” Despite two spills during the Friday track sessions, Vickers rode

bravely to secure third during qualifying the following morning. The finish saw him on the front row for the first 14-lap race. He then had a further spill exiting Lodge during the opening lap of the race, which put him back to ninth, meaning he would now be on the third row for the opening 18-lap race on the Sunday. Issues with the bike, not helped by the series of spills, saw the Thetford-based rider’s team carry out emergency mechanical work, which resulted in him being out late on the track. Because of his late arrival, he was placed at the back of the grid and struggled to finish well, coming home 13th. Sat on the sixth row of the grid for the weekend’s final race, Vickers

get any return for their efforts, before a sixth Army try and penalty completed the win. The women’s match, which saw a mixed RAF team containing Royal Navy players, went the way of the Army 60-10, while the Development match also saw the Army win, 50-4.

placed 12th at the chequered flag. Teammate SAC Lewis Rollo had a better weekend, producing two top-eight finishes in the Pirelli National Superstock 1000 Championship. Qualifying 12th for the opening race, the East Lothian rider found himself in sixth on the opening lap of the 14-lap race, but having slipped to ninth at the halfway

point, he had to settle for seventh at the flag. Having secured a fourth-row grid start for the second race of the weekend over 12 laps, Rollo came home in eighth to hold the same spot in the overall standings on 117 points. The team move on to Donington Park for Round 10 of the championships.

THE LATEST instalment in the Rugby For Heroes charity hybrid league union match went the way of the union team 39-19 at Gloucester’s Kingsholm Stadium. The annual Battle of The Codes clash, which features current and former stars of both codes of the game, is used by the charity to raise funds and awareness for military personnel transitioning to civilian life. It’s played with 40 minutes of league rules and 40 of union. Rugby World Cup winner and Rugby For Heroes patron Mike Tindall, who played as part of the union team, said: “This is a special day with everyone getting together, it’s fun but it’s tough out there.” This year half of the match proceeds were being used in support of former Leeds Rhinos player Rob Burrows, who is battling motor neurone disease.