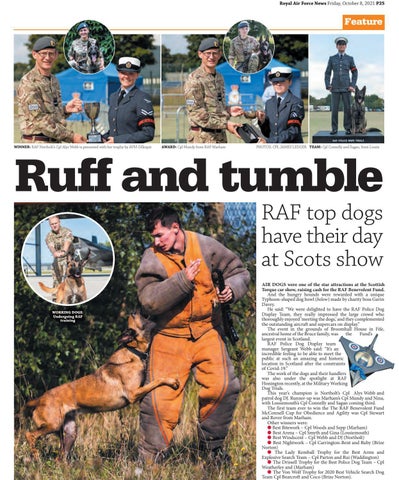 AIR DOGS were one of the star attractions at the Scottish Torque car show, raising cash for the RAF Benevolent Fund. And the hungry hounds were rewarded with a unique Typhoon-shaped dog bowl (below) made by charity boss Gavin Davey. He said: “We were delighted to have the RAF Police Dog Display Team, they really impressed the large crowd who thoroughly enjoyed ‘meeting the dogs,’ and they complemented the outstanding aircraft and supercars on display.” The event in the grounds of Broomhall House in Fife, ancestral home of the Bruce family, was the Fund’s largest event in Scotland. RAF Police Dog Display team manager Sergeant Webb said: “It’s an incredible feeling to be able to meet the public at such an amazing and historic location in Scotland after the constraints of Covid-19.” The work of the dogs and their handlers was also under the spotlight at RAF Honington recently, at the Military Working Dog Trials. This year’s champion is Northolt’s Cpl Alys Webb and patrol dog DJ. Runner-up was Marham’s Cpl Mundy and Nina, with Lossiemouth’s Cpl Connelly and Sagan coming third. The first team ever to win the The RAF Benevolent Fund McConnell Cup for Obedience and Agility was Cpl Stewart and Rover from Marham. Other winners were: Best Bitework – Cpl Woods and Sepp (Marham) Best Arena – Cpl Smyth and Gina (Lossiemouth) Best Windscent – Cpl Webb and DJ (Northolt) Best Nightwork – Cpl Carrington-Bent and Ruby (Brize Norton) The Lady Kemball Trophy for the Best Arms and Explosive Search Team – Cpl Parton and Rui (Waddington) The Drissell Trophy for the Best Police Dog Team – Cpl Weatherley and (Marham) The Von Wolf Trophy for 2020 Best Vehicle Search Dog Team Cpl Bearcroft and Coco (Brize Norton).