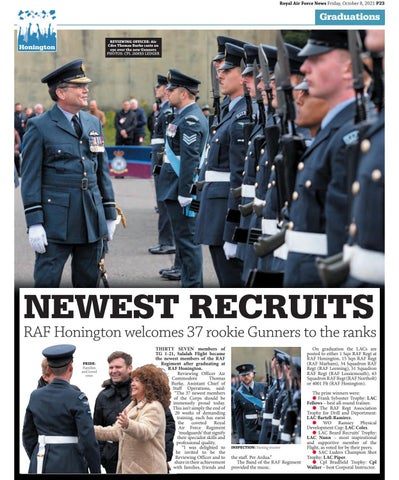 RAF Honington welcomes 37 rookie Gunners to the ranks PRIDE: Families and loved ones

THIRTY SEVEN members of TG 1-21, Salalah Flight became the newest members of the RAF Regiment after graduating at RAF Honington. Reviewing Officer Air Commodore Thomas Burke, Assistant Chief of Staff Operations, said: “The 37 newest members of the Corps should be immensely proud today. This isn’t simply the end of 20 weeks of demanding training, each has earnt the coveted Royal Air Force Regiment ‘mudguards’ that signify their specialist skills and professional quality. “I was delighted to be invited to be the Reviewing Officer and to share in their achievement with families, friends and

the staff. Per Ardua.” The Band of the RAF Regiment provided the music.