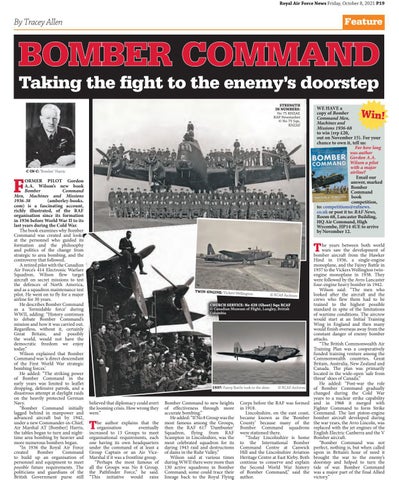 BOMBER COMMAND Taking the fight to the enemy’s doorstep STRENGTH IN NUMBERS: No 75 RNZAF, RAF Newmarket © No 75 Sqn, RNZAF

ORMER PILOT Gordon A.A. Wilson’s new book Bomber Command Men, Machines and Missions 1936-38 (amberley-books. com) is a fascinating account, richly illustrated, of the RAF organisation since its formation in 1936 before World War II to its last years during the Cold War. The book examines why Bomber Command was created and looks at the personnel who guided its formation and the philosophy and politics of the change from strategic to area bombing, and the controversy that followed. A retired pilot with the Canadian Air Force’s 414 Electronic Warfare Squadron, Wilson flew target aircraft on secret missions to test the defences of North America, and as a squadron maintenance test pilot. He went on to fly for a major airline for 30 years. He describes Bomber Command as a ‘formidable force’ during WWII, adding: “History continues to debate Bomber Command’s mission and how it was carried out. Regardless, without it, certainly Great Britain, and possibly the world, would not have the democratic freedom we enjoy today.” Wilson explained that Bomber Command was ‘a direct descendant of the First World War strategic bombing forces.’ He added: “The striking power of Bomber Command in the early years was limited to leaflet dropping, defensive patrols, and a disastrous attempt at daylight raids on the heavily protected German Navy. “Bomber Command initially lagged behind in manpower and advanced aircraft but by 1942, under a new Commander-in-Chief, Air Marshal AT [Bomber] Harris, the tables began to turn and nighttime area bombing by heavier and more numerous bombers began. “In 1936 the Royal Air Force created Bomber Command to build up an organisation of personnel and equipment to meet possible future requirements. The politicians and guardians of the British Government purse still

WE HAVE a copy of Bomber Command Men, Machines and Missions 1936-68 to win (rrp £20, out on November 15). For your chance to own it, tell us: For how long was author Gordon A.A. Wilson a pilot with a major airline? Email our answer, marked Bomber Command book competition, to: competitions@rafnews. co.uk or post it to: RAF News, Room 68, Lancaster Building, HQ Air Command, High Wycombe, HP14 4UE to arrive by November 12.

1937: Fairey Battle took to the skies

believed that diplomacy could avert the looming crisis. How wrong they were.”

he author explains that the organisation eventually increased to 13 Groups to meet organisational requirements, each one having its own headquarters under the command of at least a Group Captain or an Air ViceMarshal if it was a frontline group. “Perhaps the most famous of all the Groups was No 8 Group, the Pathfinder Force,” he said. “This initiative would raise

Bomber Command to new heights of effectiveness through more accurate bombing.” He added: “If No 8 Group was the most famous among the Groups, then the RAF 617 ‘Dambuster’ Squadron, flying from RAF Scampton in Lincolnshire, was the most celebrated squadron for its daring 1943 raid and destructions of dams in the Ruhr Valley.” Wilson said at various times during WWII there were more than 130 active squadrons in Bomber Command; some could trace their lineage back to the Royal Flying

Corps before the RAF was formed in 1918. Lincolnshire, on the east coast, became known as the ‘Bomber County’ because many of the Bomber Command squadrons were stationed there. “Today Lincolnshire is home to the International Bomber Command Centre at Canwick Hill and the Lincolnshire Aviation Heritage Centre at East Kirby. Both continue to conserve and explain the Second World War history of Bomber Command,” said the author.

he years between both world wars saw the development of bomber aircraft from the Hawker Hind in 1936, a single-engine monoplane, and the Fairey Battle in 1937 to the Vickers Wellington twinengine monoplane in 1938. They were followed by the Avro Lancaster four-engine heavy bomber in 1942. Wilson said: “The men who looked after the aircraft and the crews who flew them had to be trained to the highest possible standard in spite of the limitations of wartime conditions. The aircrew would start at an Initial Training Wing in England and then many would finish overseas away from the constant danger of enemy bomber attacks. “The British Commonwealth Air Training Plan was a cooperatively funded training venture among the Commonwealth countries, Great Britain, Australia, New Zealand and Canada. The plan was primarily located in the wide-open ‘safe from threat’ skies of Canada.” He added: “Post-war the role of Bomber Command gradually changed during the Cold War years to a nuclear strike capability and in 1968 it merged with Fighter Command to form Strike Command. The last piston-engine bomber aircraft developed during the war years, the Avro Lincoln, was replaced with the jet engines of the English Electric Canberra and the V Bomber aircraft. “Bomber Command was not perfect, nothing is, but when called upon in Britain’s hour of need it brought the war to the enemy’s doorstep and helped to turn the tide of war. Bomber Command was a major part of the final Allied victory.”