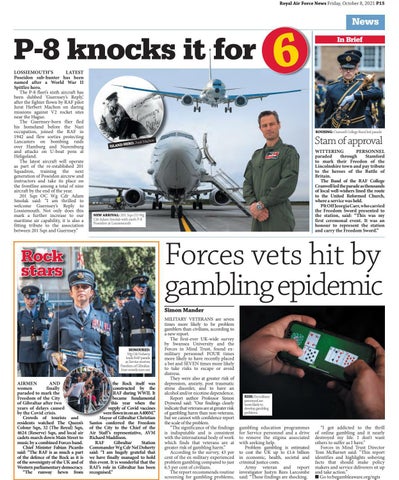 P-8 knocks it for LOSSIEMOUTH’S LATEST Poseidon sub-hunter has been named after a World War II Spitfire hero. The P-8 fleet’s sixth aircraft has been dubbed ‘Guernsey’s Reply,’ after the fighter flown by RAF pilot Jurat Herbert Machon on daring missions against V2 rocket sites near the Hague. The Guernsey-born flier fled his homeland before the Nazi occupation, joined the RAF in 1942 and flew sorties protecting Lancasters on bombing raids over Hamburg and Nuremburg and attacks on U-boat pens at Heligoland. The latest aircraft will operate as part of the re-established 201 Squadron, training the next generation of Poseidon aircrew and instructors and take its place on the frontline among a total of nine aircraft by the end of the year. 201 Sqn OC Wg Cdr Adam Smolak said: “I am thrilled to welcome Guernsey’s Reply to Lossiemouth. Not only does this mark a further increase to our maritime air capability, it is also a fitting tribute to the association between 201 Sqn and Guernsey.”

WITTERING PERSONNEL paraded through Stamford to mark their Freedon of the Lincolnshire town and pay tribute to the heroes of the Battle of Britain. The Band of the RAF College Cranwell led the parade as thousands of local well-wishers lined the route to the United Reformed Church, where a service was held. Plt Off Jeorgia Carr, who carried the Freedom Sword presented to the station, said: “This was my first ceremonal event. It was an honour to represent the station and carry the Freedom Sword.”

AIRMEN AND women finally paraded to mark the Freedom of the City of Gibraltar after two years of delays caused by the Covid crisis. Crowds of tourists and residents watched The Queen’s Colour Sqn, 32 (The Royal) Sqn, 4624 (Reserve) Sqn, and local air cadets march down Main Street to music by a combined Forces band. Chief Minister Fabian Picardo said: “The RAF is as much a part of the defence of the Rock as it is of the sovereignty of the UK and of Western parliamentary democracy. “The runway hewn from

the Rock itself was constructed by the RAF during WWII. It became fundamental this year when the supply of Covid vaccines were flown in on an A400M.” Mayor of Gibraltar Christian Santos conferred the Freedom of the City to the Chief of the Air Staff’s representative, AVM Richard Maddison. RAF Gibraltar Station Commander Wg Cdr Nel Doherty said: “I am hugely grateful that we have finally managed to hold this event. It is wonderful that the RAF’s role in Gibraltar has been recognised.”

MILITARY VETERANS are seven times more likely to be problem gamblers than civilians, according to a new report. The first-ever UK-wide survey by Swansea University and the Forces in Mind Trust, found exmilitary personnel FOUR times more likely to have recently placed a bet and SEVEN times more likely to take risks to escape or avoid distress. They were also at greater risk of depression, anxiety, post traumatic stress disorder, and to have an alcohol and/or nicotine dependence. Report author Professor Simon Dymond said: “Our findings clearly indicate that veterans are at greater risk of gambling harm than non-veterans, but we cannot with confidence report the scale of the problem. “The significance of the findings is indisputable and is consistent with the international body of work which finds that veterans are at greater risk of gambling harm.” According to the survey, 43 per cent of the ex-military experienced problem gambling compared to just 6.5 per cent of civilians. The report recommends routine screening for gambling problems,

gambling education programmes for Service personnel and a drive to remove the stigma associated with seeking help. Problem gambling is estimated to cost the UK up to £1.6 billion in economic, health, societal and criminal justice costs. Army veteran and report investigator Justyn Rees Larcombe said: “These findings are shocking.

“I got addicted to the thrill of online gambling and it nearly destroyed my life. I don’t want others to suffer as I have.” Forces in Mind Trust Director Tom McBarnet said: “This report identifies and highlights sobering facts that should make policy makers and service deliverers sit up and take action.” ■ Go to:begambleaware.org/ngts