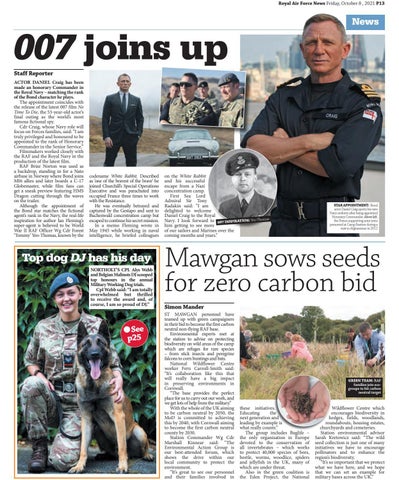 007 joins up Staff Reporter ACTOR DANIEL Craig has been made an honorary Commander in the Royal Navy – matching the rank of the Bond character he plays. The appointment coincides with the release of the latest 007 film No Time To Die, the 53-year-old actor’s final outing as the world’s most famous fictional spy. Cdr Craig, whose Navy role will focus on Forces families, said: “I am truly privileged and honoured to be appointed to the rank of Honorary Commander in the Senior Service.” Filmmakers worked closely with the RAF and the Royal Navy in the production of the latest film. RAF Brize Norton was used as a backdrop, standing in for a Nato airbase in Norway where Bond joins MI6 allies and later boards a C-17 Globemaster, while film fans can get a sneak preview featuring HMS Dragon cutting through the waves on the trailer. Although the appointment of the Bond star matches the fictional agent’s rank in the Navy, the real-life inspiration for author Ian Fleming’s super-agent is believed to be World War II RAF Officer Wg Cdr Forest ‘Tommy’ Yeo-Thomas, known by the

codename White Rabbit. Described as ‘one of the bravest of the brave’ he joined Churchill’s Special Operations Executive and was parachuted into occupied France three times to work with the Resistance. He was eventually betrayed and captured by the Gestapo and sent to Buchenwald concentration camp but escaped to continue his secret mission. In a memo Fleming wrote in May 1945 while working in naval intelligence, he briefed colleagues

Top dog DJ has his day NORTHOLT’S CPL Alys Webb and Belgian Malinois DJ scooped top honours in the annual Military Working Dog trials. Cpl Webb said: “I am totally overwhelmed but thrilled to receive the award and, of course, I am so proud of DJ.”

on the White Rabbit and his successful escape from a Nazi concentration camp. First Sea Lord Admiral Sir Tony Radakin said: “I am delighted to welcome Daniel Craig to the Royal Navy. I look forward to 007 INSPIRATION: Yeo-Thomas him getting to see more of our sailors and Marines over the coming months and years.”

STAR APPOINTMENT: Bond actor Daniel Craig sports his new Navy uniform after being appointed Honorary Commander. Above left, the Forces-supporting actor joins personnel at Camp Bastion during a visit to Afghanistan in 2012

ST MAWGAN personnel have teamed up with green campaigners in their bid to become the first carbon neutral non-flying RAF base. Environmental experts met at the station to advise on protecting biodiversity on wild areas of the camp which are refuges for rare species – from stick insects and peregrine falcons to corn buntings and bats. National Wildflower Centre worker Fern Carroll-Smith said: “It’s collaboration like this that will really have a big impact in preserving environments in Cornwall. “The base provides the perfect place for us to carry out our work, and we get lots of help from the military.” With the whole of the UK aiming to be carbon neutral by 2050, the MoD is committed to achieving this by 2040, with Cornwall aiming to become the first carbon neutral county by 2030. Station Commander Wg Cdr Marshall Kinnear said: “The Environmental Action Group is our best-attended forum, which shows the drive within our local community to protect the environment. “It’s great to see our personnel and their families involved in

these initiatives. Educating the next generation and leading by example is what really counts.” The group includes Buglife – the only organisation in Europe devoted to the conservation of all invertebrates – which works to protect 40,000 species of bees, beetle, worms, woodlice, spiders and jellyfish in the UK, many of which are under threat. Also in the green coalition is the Eden Project, the National

Wildflower Centre which encourages biodiversity in hedges, fields, woodlands, roundabouts, housing estates, churchyards and cemeteries. Station environmental advisor Sarah Kretowicz said: “The wild seed collection is just one of many initiatives we have to encourage pollinators and to enhance the region’s biodiversity. “It’s so important that we protect what we have here, and we hope that we can set an example for military bases across the UK.”