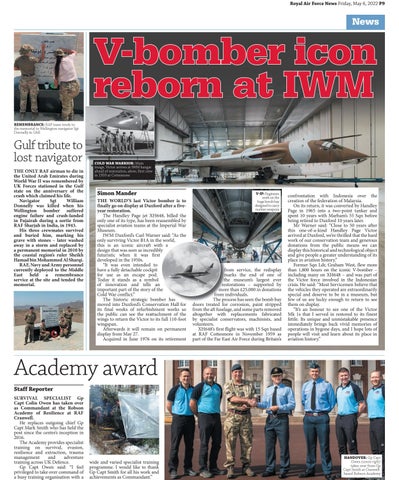 Gulf tribute to lost navigator THE ONLY RAF airman to die in the United Arab Emirates during World War II was remembered by UK Forces stationed in the Gulf state on the anniversary of the crash which claimed his life. Navigator Sgt William Donnelly was killed when his Wellington bomber suffered engine failure and crash-landed in Fujairah during a sortie from RAF Sharjah in India, in 1943. His three crewmates survived and buried him, marking his grave with stones – later washed away in a storm and replaced by a permanent memorial in 2010 by the coastal region’s ruler Sheikh Hamad bin Mohammed Al Sharqi. RAF, Navy and Army personnel currently deployed to the Middle East held a remembrance service at the site and tended the memorial.

COLD WAR WARRIOR: Main image, Victor arrives at IWM hangar ahead of restoration, above, first crew in 1959 at Cottesmore

Simon Mander THE WORLD’S last Victor bomber is to finally go on display at Duxford after a fiveyear restoration. The Handley Page jet XH648, billed the only one of its type, has been reassembled by specialist aviation teams at the Imperial War Museum. IWM Duxford’s Carl Warner said: “As the only surviving Victor B1A in the world, this is an iconic aircraft with a design that was seen as incredibly futuristic when it was first developed in the 1950s. “It was even intended to have a fully detachable cockpit for use as an escape pod. Today it stands as a symbol of innovation and tells an important part of the story of the Cold War conflict.” The historic strategic bomber has moved into Duxford’s Conservation Hall for its final weeks of refurbishment works so the public can see the reattachment of the wings to return the Victor to its full 110-foot wingspan. Afterwards it will remain on permanent display from May 27. Acquired in June 1976 on its retirement

from service, the redisplay marks the end of one of the museum’s largest ever restorations – supported by more than £25,000 in donations from individuals. The process has seen the bomb bay doors treated for corrosion, paint stripped from the aft fuselage, and some parts removed altogether with replacements fabricated by specialist conservators, machinists, and volunteers. XH648’s first flight was with 15 Sqn based at RAF Cottesmore in November 1959 as part of the Far East Air Force during Britain’s

confrontation with Indonesia over the creation of the federation of Malaysia. On its return, it was converted by Handley Page in 1965 into a two-point tanker and spent 10 years with Marham’s 55 Sqn before being retired to Duxford 10 years later. Mr Warner said: “Close to 50 years after this one-of-a-kind Handley Page Victor arrived at Duxford, we’re thrilled that the hard work of our conservation team and generous donations from the public means we can display this historical and technological object and give people a greater understanding of its place in aviation history.” Former Sqn Ldr, Graham West, flew more than 1,800 hours on the iconic V-bomber – including many on XH648 – and was part of the Victor force involved in the Indonesian crisis. He said: “Most Servicemen believe that the vehicles they operated are extraordinarily special and deserve to be in a museum, but few of us are lucky enough to return to see them on display. “It’s an honour to see one of the Victor Mk 1s that I served in restored to its finest fettle. Its unique and unmistakable presence immediately brings back vivid memories of operations in bygone days, and I hope lots of people will visit and learn about its place in aviation history.”

Academy award Staff Reporter SURVIVAL SPECIALIST Gp Capt Colin Owen has taken over as Commandant at the Robson Academy of Resilience at RAF Cranwell. He replaces outgoing chief Gp Capt Mark Smith who has held the post since the centre’s inception in 2016. The Academy provides specialist training on survival, evasion, resilience and extraction, trauma management and adventure training across UK Defence. Gp Capt Owen said: “I feel privileged to take over command of a busy training organisation with a

wide and varied specialist training programme. I would like to thank Gp Capt Smith for all his work and achievements as Commandant.”