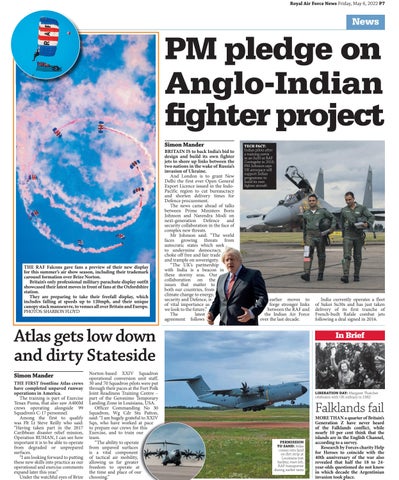 THE RAF Falcons gave fans a preview of their new display for this summer’s air show season, including their trademark carousel formation over Brize Norton. Britain’s only professional military parachute display outfit showcased their latest moves in front of fans at the Oxfordshire station. They are preparing to take their freefall display, which includes falling at speeds up to 120mph, and their unique canopy stack manoeuvre, to venues all over Britain and Europe. PHOTOS: SHARRON FLOYD

BRITAIN IS to back India’s bid to design and build its own fighter jets to shore up links between the two nations in the wake of Russia’s invasion of Ukraine. And London is to grant New Delhi the first ever Open General Export Licence issued in the IndoPacific region to cut bureaucracy and shorten delivery times for Defence procurement. The news came ahead of talks between Prime Ministers Boris Johnson and Narendra Modi on next-generation Defence and security collaboration in the face of complex new threats. Mr Johnson said: “The world faces growing threats from autocratic states which seek to undermine democracy, choke off free and fair trade and trample on sovereignty. “The UK’s partnership with India is a beacon in these stormy seas. Our collaboration on the issues that matter to both our countries, from climate change to energy, security and Defence, is of vital importance as we look to the future.” The latest agreement follows

TECH PACT: Indian pilots after a training sortie in an Su30 at RAF Coningsby in 2016. PM Johnson says UK aerospace will support Indian programme to build its own fighter aircraft

earlier moves to forge stronger links between the RAF and the Indian Air Force over the last decade.

Atlas gets low down and dirty Stateside Simon Mander THE FIRST frontline Atlas crews have completed unpaved runway operations in America. The training is part of Exercise Tenax Puma, that also saw A400M crews operating alongside 99 Squadron’s C-17 personnel. Among the first to qualify was Flt Lt Steve Reilly who said: “Having taken part in the 2017 Caribbean disaster relief mission, Operation RUMAN, I can see how important it is to be able to operate from degraded or unprepared surfaces. “I am looking forward to putting these new skills into practice as our operational and exercise comments expand later this year.” Under the watchful eyes of Brize

Norton-based XXIV Squadron operational conversion unit staff, 30 and 70 Squadron pilots were put through their paces at the Fort Polk Joint Readiness Training Centre – part of the Geronimo Temporary Landing Zone in Louisiana, USA. Officer Commanding No 30 Squadron, Wg Cdr Stu Patton, said: “I am hugely grateful to XXIV Sqn, who have worked at pace to prepare our crews for this Exercise, and to train our team. “The ability to operate from unpaved surfaces is a vital component of tactical air mobility, allowing us far greater freedom to operate at the time and place of our choosing.”

India currently operates a fleet of Sukoi Su30s and has just taken delivery of its first tranche of French-built Rafale combat jets following a deal signed in 2016.

MORE THAN a quarter of Britain’s Generation Z have never heard of the Falklands conflict, while nearly 10 per cent think that the islands are in the English Channel, according to a survey. Research by Forces charity Help for Heroes to coincide with the 40th anniversary of the war also revealed that half the 18 to 24year-olds questioned do not know in which decade the Argentinian invasion took place.