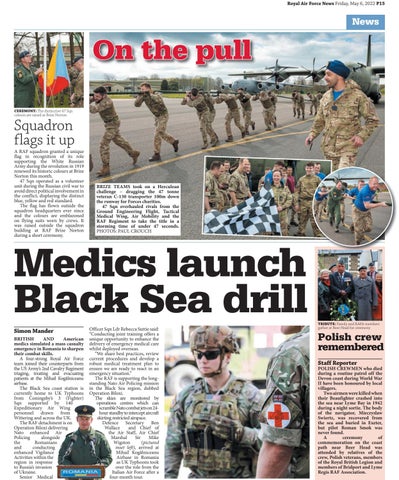 On the pull CEREMONY: The distinctive 47 Sqn colours are raised at Brize Norton

Squadron flags it up

A RAF squadron granted a unique flag in recognition of its role supporting the White Russian Army during the revolution in 1919 renewed its historic colours at Brize Norton this month. 47 Sqn operated as a volunteer unit during the Russian civil war to avoid direct political involvement in the conflict, displaying the distinct blue, yellow and red standard. The flag has flown outside the squadron headquarters ever since and the colours are emblazoned on flying suits worn by crews. It was raised outside the squadron building at RAF Brize Norton during a short ceremony.

BRIZE TEAMS took on a Herculean challenge – dragging the 47 tonne veteran C-130 transporter 100m down the runway for Forces charities. 47 Sqn overhauled rivals from the Ground Engineering Flight, Tactical Medical Wing, Air Mobility and the RAF Regiment to take the title in a storming time of under 47 seconds. PHOTOS: PAUL CROUCH

Medics launch Black Sea drill Simon Mander BRITISH AND American medics simulated a mass casualty emergency in Romania to sharpen their combat skills. A four-strong Royal Air Force team joined their counterparts from the US Army’s 2nd Cavalry Regiment triaging, treating and evacuating patients at the Mihail Kogălniceanu airbase. The Black Sea coast station is currently home to UK Typhoons from Coningsby’s 3 (Fighter) Sqn supported by 140 Expeditionary Air Wing personnel drawn from Wittering and across the UK. The RAF detachment is on Operation Biloxi delivering Nato enhanced Air Policing alongside the Romanians and conducting enhanced Vigilance Activities within the region in response to Russia’s invasion of Ukraine. Senior Medical

POLISH CREWMEN who died during a routine patrol off the Devon coast during World War II have been honoured by local villagers. Two airmen were killed when their Beaufighter crashed into the sea near Lyme Bay in 1942 during a night sortie. The body of the navigator, Mieczyslaw Swiertz, was recovered from the sea and buried in Exeter, but pilot Roman Smok was never found. A ceremony of commemoration on the coast path near Beer Head was attended by relatives of the crew, Polish veterans, members of the Royal British Legion and members of Bridport and Lyme Regis RAF Association.