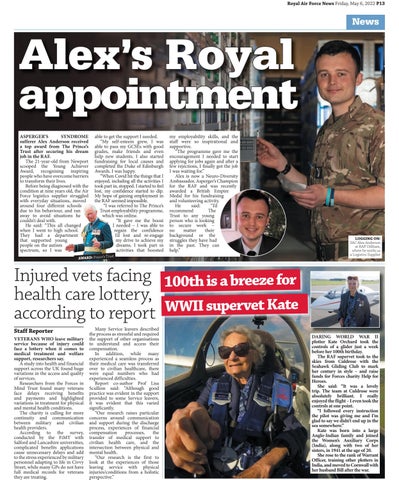 Alex’s Royal appointment ASPERGER’S SYNDROME sufferer Alex Anderson received a top award from The Prince’s Trust after securing his dream job in the RAF. The 21-year-old from Newport scooped the Young Achiever Award, recognising inspiring people who have overcome barriers to transform their lives. Before being diagnosed with the condition at nine years old, the Air Force logistics supplier struggled with everyday situations, moved around four different schools due to his behaviour, and ran away to avoid situations he couldn’t deal with. He said: “This all changed when I went to high school. They had a department that supported young people on the autism spectrum, so I was

able to get the support I needed. “My self-esteem grew, I was able to pass my GCSEs with good grades, make friends and even help new students. I also started fundraising for local causes and completed the Duke of Edinburgh Awards. I was happy. “When Covid hit the things that I enjoyed, including all the activities I took part in, stopped. I started to feel lost, my confidence started to dip. My hope of gaining employment in the RAF seemed impossible. “I was referred to The Prince’s Trust employability programme, which was online. “It gave me the boost I needed – I was able to regain the confidence I’d lost and re-engage my drive to achieve my dreams. I took part in activities that boosted

my employability skills, and the staff were so inspirational and supportive. “The programme gave me the encouragement I needed to start applying for jobs again and after a few rejections, I finally got the job I was waiting for.” Alex is now a Neuro-Diversity Ambassador, Asperger’s Champion for the RAF and was recently awarded a British Empire Medal for his fundraising and volunteering activity. He said: “I’d recommend The Trust to any young person who is looking to secure work – no matter their background or the struggles they have had in the past. They can help.”

LOGGING ON: SAC Alex Anderson at RAF Odiham, where he works as a Logistics Supplier

Injured vets facing 100th is a breeze for health care lottery, pervet Kate su II WW according to report Staff Reporter VETERANS WHO leave military service because of injury could face a lottery when it comes to medical treatment and welfare support, researchers say. A study into health and financial support across the UK found huge variations in the access and quality of services. Researchers from the Forces in Mind Trust found many veterans face delays receiving benefits and payments and highlighted variations in treatment for physical and mental health conditions. The charity is calling for more continuity and communication between military and civilian health providers. According to the survey, conducted by the FiMT with Salford and Lancashire universities, complicated benefits applications cause unnecessary delays and add to the stress experienced by military personnel adapting to life in Civvy Street, while many GPs do not have full medical records for veterans they are treating.

Many Service leavers described the process as stressful and required the support of other organisations to understand and access their compensation. In addition, while many experienced a seamless process as their medical care was transferred over to civilian healthcare, there were equal numbers who had experienced difficulties. Report co-author Prof Lisa Scullion said: “Although good practice was evident in the support provided to some Service leavers, it was evident that this varied significantly. “Our research raises particular concerns around communication and support during the discharge process, experiences of financial compensation processes, the transfer of medical support to civilian health care, and the intersection between physical and mental health. “Our research is the first to look at the experiences of those leaving service with physical injuries/conditions from a holistic perspective.”

DARING WORLD WAR II plotter Kate Orchard took the controls of a glider just a week before her 100th birthday. The RAF supervet took to the skies from Culdrose with the Seahawk Gliding Club to mark her century in style – and raise funds for Forces charity Help for Heroes. She said: “It was a lovely trip. The team at Culdrose were absolutely brilliant. I really enjoyed the flight – I even took the controls at one point. “I followed every instruction the pilot was giving me and I’m glad to say we didn’t end up in the sea somewhere.” Kate was born into a large Anglo-Indian family and joined the Women’s Auxiliary Corps (India), along with two of her sisters, in 1941 at the age of 20. She rose to the rank of Warrant Officer, training other plotters in India, and moved to Cornwall with her husband Bill after the war.