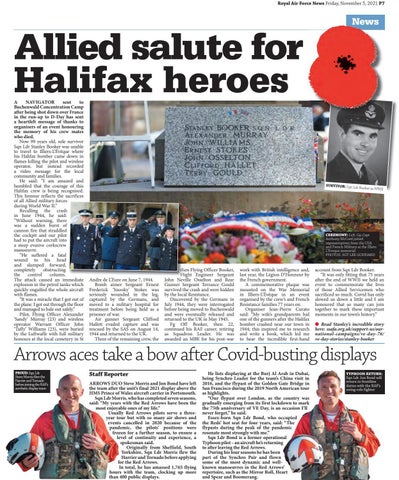 A NAVIGATOR sent to Buchenwald Concentration Camp after being shot down over France in the run-up to D-Day has sent a heartfelt message of thanks to organisers of an event honouring the memory of his crew mates who died. Now 99 years old, sole survivor Sqn Ldr Stanley Booker was unable to travel to Illiers-L’Évêque where his Halifax bomber came down in flames killing the pilot and wireless operator, but instead recorded a video message for the local community and families. He said: “I am amazed and humbled that the courage of this Halifax crew is being recognised. This honour reflects the sacrifices of all Allied military forces during World War II.” Recalling the crash in June 1944, he said: “Without warning, there was a sudden burst of cannon fire that straddled the cockpit and our pilot had to put the aircraft into a steep evasive corkscrew manoeuvre. “He suffered a fatal wound to his head and slumped forward, completely obstructing the control column. The attack caused an immediate explosion in the petrol tanks which quickly engulfed the whole aircraft with flames. “It was a miracle that I got out of the plane. I got out through the floor and managed to bale out safely.” Pilot, Flying Officer Alexander ‘Sandy’ Murray (23) and wireless operator Warrant Officer John ‘Taffy’ Williams (23), were buried by the Luftwaffe with full military honours at the local cemetery in St

Andre de L’Eure on June 7, 1944. Bomb aimer Sergeant Ernest Frederick ‘Snooky’ Stokes was seriously wounded in the leg, captured by the Germans, and moved to a military hospital for treatment before being held as a prisoner of war. Air gunner Sergeant Clifford Hallett evaded capture and was rescued by the SAS on August 14, 1944 and returned to the UK. Three of the remaining crew, the

then Flying Officer Booker, Flight Engineer Sergeant John Neville Osselton and Rear Gunner Sergeant Terrance Gould survived the crash and were hidden by the local Resistance. Discovered by the Germans in July 1944, they were interrogated before being moved to Buchenwald and were eventually released and returned to the UK in May 1945. Fg Off Booker, then 22, continued his RAF career, retiring as Squadron Leader. He was awarded an MBE for his post-war

work with British intelligence and, last year, the Légion D’Honneur by the French government. A commemorative plaque was mounted on the War Memorial in Illiers-L’Évêque in an event organised by the crew’s and French Resistance families 77 years on. Organiser Jean-Pierre Curato said: “My wife’s grandparents hid one of the gunners after the Halifax bomber crashed near our town in 1944; this inspired me to research and write a book, which led me to hear the incredible first-hand

account from Sqn Ldr Booker. “It was only fitting that 75 years after the end of WWII we held an event to commemorate the lives of those Allied Servicemen who sacrificed so much. Covid has only slowed us down a little and I am honoured that so many can join together to mark these important moments in our town’s history.” Read Stanley’s incredible story here: ssafa.org.uk/support-us/ournational-campaigns/ve-day-76/ ve-day-stories/stanley-booker

Staff Reporter ARROWS DUO Steve Morris and Jon Bond have left the team after the unit’s final 2021 display above the HMS Prince of Wales aircraft carrier in Portsmouth. Sqn Ldr Morris, who has completed seven seasons, said: “My years with the Red Arrows have been the most enjoyable ones of my life.” Usually Red Arrows pilots serve a threeyear tour but with so many air shows and events cancelled in 2020 because of the pandemic, the pilots’ positions were frozen for a further season, to ensure a level of continuity and experience, a spokesman said. Originally from Sheffield, South Yorkshire, Sqn Ldr Morris flew the Harrier and Tornado before applying for the Red Arrows. In total, he has amassed 1,765 flying hours with the team, clocking up more than 400 public displays.

He lists displaying at the Burj Al Arab in Dubai, being Synchro Leader for the team’s China visit in 2016, and the flypast of the Golden Gate Bridge in San Francisco during the 2019 North American tour as highlights. “Our flypast over London, as the country was gradually emerging from its first lockdown to mark the 75th anniversary of VE Day, is an occasion I’ll never forget,” he said. Essex-born Sqn Ldr Bond, who occupied the Reds’ hot seat for four years, said: “The flypasts during the peak of the pandemic resonate most strongly with me.” Sqn Ldr Bond is a former operational Typhoon pilot – an aircraft he’s returning to after leaving the Red Arrows. During his four seasons he has been part of the Synchro Pair and flown some of the most dynamic and wellknown manoeuvres in the Red Arrows’ repertoire, such as the Mirror Roll, Heart and Spear and Boomerang.