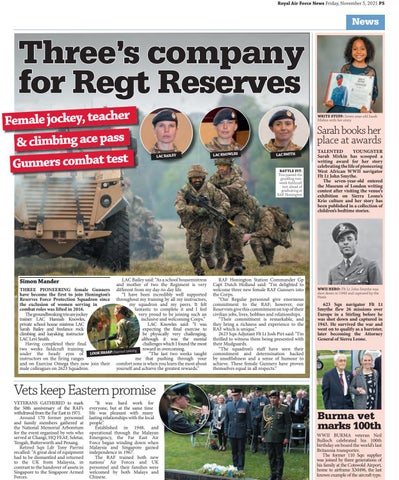 LAC Bailey said: “As a school housemistress and mother of two the Regiment is very THREE PIONEERING female Gunners different from my day-to-day life. have become the first to join Honington’s “I have been incredibly well supported Reserves Force Protection Squadron since throughout my training by all my instructors, the exclusion of women serving in my squadron and my peers. It felt combat roles was lifted in 2016. fantastic to complete it and I feel The groundbreaking trio are jockey very proud to be joining such an trainer LAC Hannah Knowles, inclusive and welcoming Corps.” private school house mistress LAC LAC Knowles said: “I was Sarah Bailey and freelance rock expecting the final exercise to climbing and kayaking instructor be physically very challenging, LAC Levi Smith. although it was the mental Having completed their final challenges which I found the most two weeks fieldcraft training reward in overcoming. ng ini tra et on Bay under the beady eyes of LOOK SHARP: “The last two weeks taught instructors on the firing ranges me that pushing through your and on Exercise Omega they now join their comfort zone is when you learn the most about male colleagues on 2623 Squadron. yourself and achieve the greatest rewards.”

RAF Honington Station Commander Gp Capt Dutch Holland said: “I’m delighted to welcome three new female RAF Gunners into the Corps. “Our Regular personnel give enormous commitment to the RAF; however, our Reservists give this commitment on top of their civilian jobs, lives, hobbies and relationships. “Their commitment is remarkable, and they bring a richness and experience to the RAF which is unique.” 2623 Sqn Adjutant Flt Lt Josh Pirt said: “I’m thrilled to witness them being presented with their Mudguards. “The squadron’s staff have seen their commitment and determination backed by unselfishness and a sense of humour to achieve. These female Gunners have proven themselves equal in all respects.”

TALENTED YOUNGSTER Sarah Mirkin has scooped a writing award for her story celebrating the life of pioneering West African WWII navigator Flt Lt John Smythe. The seven-year-old entered the Museum of London writing contest after visiting the venue’s exhibition on Sierra Leone’s Krio culture and her story has been published in a collection of children’s bedtime stories.

WWII HERO: Flt Lt John Smythe was shot down in 1943 and captured by the Nazis

623 Sqn navigator Flt Lt Smythe flew 26 missions over Europe in a Stirling before he was shot down and captured in 1943. He survived the war and went on to qualify as a barrister, later becoming the Attorney General of Sierra Leone.

Vets keep Eastern promise VETERANS GATHERED to mark the 50th anniversary of the RAF’s withdrawal from the Far East in 1971. Around 170 former personnel and family members gathered at the National Memorial Arboretum for the event organised by vets who served at Changi, HQ FEAF, Seletar, Tengah, Butterworth and Penang. Retired Sqn Ldr Tony Parrini recalled: “A great deal of equipment had to be dismantled and returned to the UK from Malaysia, in contrast to the handover of assets in Singapore to the Singapore Armed Forces.

“It was hard work for everyone, but at the same time life was pleasant with many lasting relationships with the local people”. Established in 1948, and operational through the Malayan Emergency, the Far East Air Force began winding down when Malaysia and Singapore gained independence in 1967. The RAF trained both new nations’ Air Forces and UK personnel and their families were welcomed by both Malays and Chinese.

Burma vet marks 100th WWII BURMA veteran Neil Bulloch celebrated his 100th birthday on board the world’s last Britannia transporter. The former 110 Sqn supplier was joined by three generations of his family at the Cotswold Airport, home to airframe XM496, the last known example of the aircraft type.