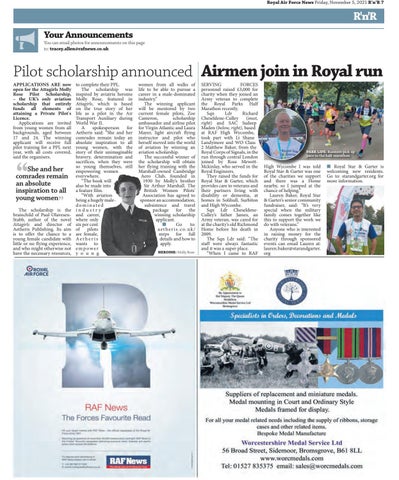 Pilot scholarship announced Airmen join in Royal run APPLICATIONS ARE now open for the Attagirls Molly Rose Pilot Scholarship, – the UK’s only aviation scholarship that entirely funds all elements of attaining a Private Pilot’s Licence. Applications are invited from young women from all backgrounds, aged between 17 and 24. The winning applicant will receive full pilot training for a PPL next year, with all costs covered, said the organisers.

The scholarship is the brainchild of Paul OlavesenStabb, author of the novel Attagirls and director of Aetheris Publishing. Its aim is to offer the chance to a young female candidate with little or no flying experience, and who might otherwise not have the necessary resources,

to complete their PPL. The scholarship was inspired by aviatrix heroine Molly Rose, featured in Attagirls, which is based on the true story of her life as a pilot in the Air Transport Auxiliary during World War II. A spokesperson for Aetheris said: “She and her comrades remain today an absolute inspiration to all young women, with the story of their unimaginable bravery, determination and sacrifices, when they were so young themselves, still empowering women everywhere. “The book will also be made into a feature film. “With aviation being a hugely maledominated industry and career, where only six per cent of pilots are female, Aetheris wants to empower y o u n g

women from all walks of life to be able to pursue a career in a male-dominated industry.” The winning applicant will be mentored by two current female pilots, Zoe Cameron, scholarship ambassador and airline pilot for Virgin Atlantic and Laura Mayer, light aircraft flying instructor and pilot who herself moved into the world of aviation by winning an aviation scholarship. The successful winner of the scholarship will obtain her flying training with the Marshall-owned Cambridge Aero Club, founded in 1930 by Molly’s brother Sir Arthur Marshall. The British Women Pilots’ Association has agreed to sponsor an accommodation, subsistence and travel package for the winning scholarship applicant. Q Go to: a e t h e r i s . c o. u k / mrps for full details and how to apply. HEROINE: Molly Rose

SERVING FORCES personnel raised £3,000 for charity when they joined an Army veteran to complete the Royal Parks Half Marathon recently. Sqn Ldr Richard Cheseldene-Culley (inset, right) and SAC Sudeep Maden (below, right), based at RAF High Wycombe, took part with Lt Shane Landymore and WO Class 2 Matthew Baker, from the Royal Corps of Signals, in the run through central London joined by Ross MewettMckinlay, who served in the Royal Engineers. They raised the funds for Royal Star &amp; Garter, which provides care to veterans and their partners living with disability or dementia, at homes in Solihull, Surbiton and High Wycombe. Sqn Ldr CheseldeneCulley’s father James, an Army veteran, was cared for at the charity’s old Richmond Home before his death in 2009. The Sqn Ldr said: “The staff were always fantastic and it was a super place. “When I came to RAF

PARK LIFE: Runners pick up pace in the half marathon

High Wycombe I was told Royal Star &amp; Garter was one of the charities we support and there was a Home nearby, so I jumped at the chance of helping.” Lauren Baker, Royal Star &amp; Garter’s senior community fundraiser, said: “It’s very special when the military family comes together like this to support the work we do with veterans.” Anyone who is interested in raising money for the charity through sponsored events can email Lauren at: lauren.baker@starandgarter. org