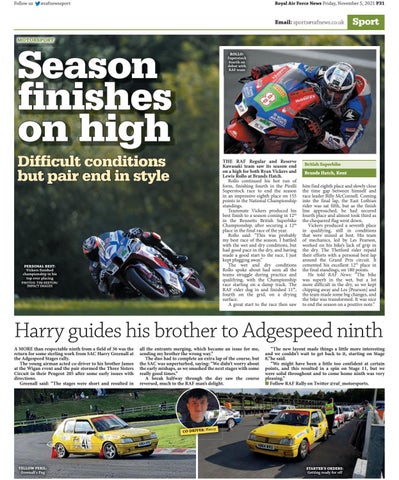 THE RAF Regular and Reserve Kawasaki team saw its season end on a high for both Ryan Vickers and Lewis Rollo at Brands Hatch. Rollo continued his hot run of form, finishing fourth in the Pirelli Superstock race to end the season in an impressive eighth place on 155 points in the National Championship standings. Teammate Vickers produced his best finish to a season coming in 12th in the Bennetts British Superbike Championship, after securing a 12th place in the final race of the year. Rollo said: “This was probably my best race of the season. I battled with the wet and dry conditions, but had good pace in the dry, and having made a good start to the race, I just kept plugging away.” The wet and dry conditions Rollo spoke about had seen all the teams struggle during practice and qualifying, with the Championship race starting on a damp track. The RAF rider dug in and finished 11th, fourth on the grid, on a drying surface. A great start to the race then saw

British Superbike Brands Hatch, Kent him find eighth place and slowly close the time gap between himself and race leader Billy McConnell. Coming into the final lap, the East Lothian rider was sat fifth, but as the finish line approached, he had secured fourth place and almost took third as the chequered flag went down. Vickers produced a seventh place in qualifying, still in conditions that were mixed at best. His team of mechanics, led by Les Pearson, worked on his bike’s lack of grip in the dry. The Thetford rider repaid their efforts with a personal best lap around the Grand Prix circuit. It cemented his excellent 12th place in the final standings, on 180 points. He told RAF News: “The bike was superb in the wet, but a lot more difficult in the dry, so we kept chipping away and Les [Pearson] and the team made some big changes, and the bike was transformed. It was nice to end the season on a positive note.”

Harry guides his brother to Adgespeed ninth A MORE than respectable ninth from a field of 36 was the return for some sterling work from SAC Harry Greenall at the Adgespeed Stages rally. The young airman acted co-driver to his brother James at the Wigan event and the pair stormed the Three Sisters Circuit in their Peugeot 205 after some early issues with directions. Greenall said: “The stages were short and resulted in

all the entrants merging, which became an issue for me, sending my brother the wrong way.” The duo had to complete an extra lap of the course, but the SAC was unperturbed, saying: “We didn’t worry about the early mishaps, as we smashed the next stages with some really good times.” A break halfway through the day saw the course reversed, much to the RAF man’s delight.

“The new layout made things a little more interesting and we couldn’t wait to get back to it, starting on Stage 8,”he said. “We might have been a little too confident at certain points, and this resulted in a spin on Stage 11, but we were solid throughout and to come home ninth was very pleasing.” ■ Follow RAF Rally on Twitter @raf_motorsports.

STARTER&#39;S ORDERS: Getting ready for off